Today’s news brought a hysterically horrid report about the Pope in Portugal. He called for pastoral action to tackle abortion and same-sex marriage, which he called “some of today’s most insidious and dangerous threats to the common good“.

(Insidious means: harmful but enticing; seductive; having a gradual and cumulative effect; spreading harmfully in a subtle or stealthy manner.)

These vile words came as he spoke at the famous Fatima shrine, Basilica of Our Lady of the Rosary, one of the most revered sites in Catholicism. 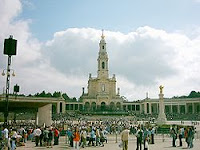 The basilica (photo right) was built to commemorate alleged events of 1917 when three shepherd peasant children claimed to have had a vision of the “Virgin of the Rosary”, (Our Lady of Fátima). The little children experienced the purported ‘Marian apparitions’ in a nearby sheep pasture. Strangely, people believed them and today millions of Catholics flock to the site in search of miracle cures and to worship there.

I find it incredulous that a modern Christian mind whose job it is to have compassion in the world for real human conditions could have such devout faith in unproven non-human fairy tales told by naive shepherd boys–and at the same time discredit real-life authentic love between two adults.

What’s terribly wrong with this picture!?

The Pope has no clue what gay marriage is and doesn’t want to know. He refuses to accept that it’s about love. That it’s a ceremony of devotion and commitment between two same-sex adults in the non-airy-fairy working world finding realistic ways to enhance each other’s daily lives.

The challenge is whether to attend to imaginary mythology or real life love? The choice seems so obvious as to not be a choice. Yet this supposed religious leader who wishes the world to be a better place, chooses to favor magical mysteries over real hands-on goodness in action.

The world will not be a better place until such influential leaders dressed in spotless while linen clothing and gold rings gives up his lofty spiritual myths, throws off his sterile robes and lives among the poor laying bricks and seeing the validity in all forms of human love.

He would rather protect sexual criminals in order to maintain hypocritical clerical ‘purity’ (talk about insidious!) than to recruit openly loving gay and lesbian adults into the church and bless them with marriage.