According to a new UN report presented in Tunis, Tunisia, on October 20th, Tunisia, Libya and United Arab Emirates are the only 3 Arab nations where famine has been eradicated. The Food and Agriculture Organization of the United Nations conducted the survey of 17 Arab states ahead of a global summit on hunger, malnutrition and food security, set for November 16th-18th in Rome. (There are a total of 25 Arab nations, ranging from Morocco in the west to Iraq in the east. Iran is considered Persian not Arabic.)

Certainly this is good news for a few but overall for the majority of the 325 million people in that swath of earth, it’s not. Poverty and hunger are ills that should be resolved by good governance and grass roots organizations to relieve the problems. But these two ‘plagues’ persist in the majority of Arab countries as governments don’t appear to take the suffering of their own people seriously. Leaders would rather buy weapons and tolerate corruption than cure misery.

And it’s a curious fact that these same impoverished lands are also among the most homophobic cultures on the planet–in addition to Jamaica. The range of attitudes and treatments in these countries runs from stigma and rejection to actual death penalties. 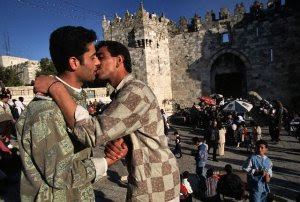 Is there any common thread between these two phenomena, between deprivation and discrimination, between the anger within poverty and the anger at homosexuals?
(Photo right: traditional friendship kiss)

Deprivation breeds anger in it victims; deprivation is cruel and unusual punishment for no justifiable reason and renders a victim helpless and hateful. Since an individual can’t strike out against something as amorphous and complex as a government it is more convenient and available to strike out against something particular and local, such as a person caught being sexual with someone of the same gender.

As well, these Arabic countries are also Muslim countries which interprets Islam’s holy scriptures in a way that urges people to condemn and scorn homosexuals. This religious condemnation legitimizes expressions of anger, which ordinarily is suppressed by authorities. But gays represent a legitimate target for this displaced anger and the reaction toward them is often excessive and harsh or murderous (some call it ‘spiritual violence’) – even to the point of an honor killing of a family member to redeem family’s shame for have a homosexual among them.

As if privation and religion are not enough drivers of violence, there is another urge against homosexuality in these Arab/Muslim cultures. This is the well-documented ‘open secret’ than many, if not a majority, of pre-marital men experience their first sexual contact with other males.

Usually this natural drive has to be shrouded in privacy, denial and guilt, oppressive forces that evoke silent resentment at having to hide what should be a thrill. Instead it becomes a shame; what should be pleasure is turned into anguish at desiring carnal intimacy. And for genuinely gay Arabs their sense of self is clouded and punctuated with fear and self-doubt.

At a certain pitch of anguish and frustration all these negative feelings can sometimes be expurgated, purged, by turning individually or in a group to verbal or physical violence against an actual or alleged homosexual who is found out or suspected.

It is a very sad entanglement of poverty, helplessness, social anger, religious conditioning, family shame and personal guilt (or any one of these) that drive homophobia into the blind recesses of most Arab minds.

And it’s not just male homosexuality. In a recent book from Arab Jordan, Bareed Mista3jl, one lesbian recounted this most painful experience of enraged homophobia from her own father:

My father has a bad temper. One day a girl came back home with me after school. We were sitting on the floor of my bedroom kissing. My father walked in on us, did not say a word, and asked the girl to leave. Then he beat me up with his fists and his belt and his cane. “Shut up before I break my fist on your face…you animal…I curse the day you were born…’ I begged him to stop. I begged like I never thought I would beg in my life. I cried out please, please. I screamed with all my lungs. He screamed, ‘you will not learn your lesson unless I bury you. If I ever see you doing so much as looking at a girl I will pluck out your eyes and break your skull.’ I begged and pleaded. No human being should ever have to plead for anything, especially from her own father. It’s been eight years since. He broke so much more than my arm that day. Every time I remember the way I pleaded for him to stop, I start crying and can’t stop… (more about the book)

The rage of homophobia is the rage of deprivation, religious repression, secret shame, family dishonor. Overcoming such rage will take generations of defiance and courage and truth-telling. This is true of many societies around the world, not just the Arab world. Poverty and deprivation and repressive religions and homophobia are everywhere.