Life is Hard in the Kenyan Slums

Kenya's slums are an insult to modern civilization. They are dirty, unsanitary, crowded with unemployed people and under educated children. A walk through this Methare slum on the outskirts of Nairobi reveals the inequality and corruption of the government.

Look at this daunting and harsh video. See the images and read the text. It was filmed in 2010 in the huge Methare district just outside Nairobi in Kenya.

With its neighbor, the Kibera district, the two are the largest slum cities in Africa. (photo) 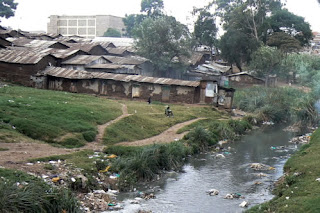 I visited this ‘city’ in 2008 during a lull in the post-election riots that resulted in more than 1500 deaths from political and tribal ‘warfare’. See my photo gallery of the visit.

What makes these images–the film and the photos–so disturbing is not just the dreadful living conditions for so many people but that the situation has been allowed to continue for so many years–generations. Nothing changes regardless of who is governing in central Nairobi, just ten miles away. Methare can be seen from atop the parliament building tower. (photo left below)

To add insult to injury, members of parliament are paid an astonishing $126,000 yearly salary and recently, in June 2010, had the effrontery to propose an increase to $175,000. The proposal was met with howls of protest.

This corruption is not just in money matters but corruption of the soul that is indifferent to the sufferings of fellow citizens. Corruption in the social conscience allows such misery to continue for generations.

Parliament members do not deserve such an egregious payroll amount. How can anyone with a human heart look at this degrading scene and not be moved to action? One salary could build ten new houses in Methare.

Long-winded analyses have spread across countless pages of study after study determining why these conditions are so bad but no significant change has resulted from the paperwork. Small palliative gestures are made such as a health clinic in Methare but injured and sick people still go to local healers because the clinic lines are too long. 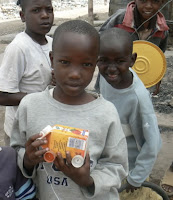 A friend of mine volunteers to teach French at a grammar school in Methare. His heart is in the right place but will the kids ever get out of that place? Look at the photo gallery of Methare slum What chance do these kids have for prosperity, education and quality of life?

Human indifference to human agonia (struggle) perpetuates bad behavior and attitudes among societies; among the worst is political indifference. Those in power want to secure and protect their own comfort and privilege first and if there is anything left over then it can go to the needy. How much of the $126,000 goes beyond the immediate family or tribe? Probably precious little.

For a crippled Methare resident a mere annual subsidy of $2500 would allow him sufficient care to maintain his health and offer some dignity, but it will never happen because the social services network cannot afford much beyond his $50 wheelchair.

This is not just a Kenyan issue. Every major society is infused with ‘me first’ thinking. Even Communism which was idealized as an egalitarian system quickly became corrupt and murderous under Stalin to satiate his insane paranoia and protect his political and economic status. Africa since independence, two or three generation ago, has suffered similar carnage–not country against country but domestic citizen/soldier against 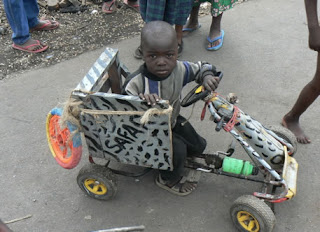 citizen/soldier in the name of political tribal power with its access to the treasury.

Kenya now does the same but with a democratic facade and far fewer bullets–looting the treasury by voting for their own huge salaries and stealing from the poor who remain in degrading conditions, in wheelchairs and in the mud.