My Uncle and Other Young Soldiers Who Died in War: from World War I to Iraq.

I usually watch the PBS News Hour with Jim Lehrer. At the end of the the program the News Hour sometimes shows recently killed troops from Iraq and Afghanistan They are shown in silence with a photo of each and identifying information, some as young as 19. Since 2003 there have been about 4412 dead from the Iraq war (6630 by February 2013). 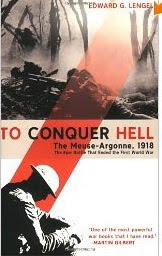 Shortly after the News Hour I return to my reading, currently ‘To Conquer Hell’ by Edward Lengel, published in 2008, 92 years after the historic battle known as the Meuse-Argonne Offensive of World War I. The book chronicles the daily horrors of that period from September 26, 1918 to the armistice on November 11, 1918.

It may seem an odd choice for casual reading but the book, for me, is not just a narrative about a far off and distant war event. My great uncle John (photo below left) was killed in that offensive on October 16, less than month before the final defeat of Germany.

I’ve known about John for many years. I even co-wrote a short biography about his short life: he was 30 years, 4 months and 5 days old. He had sent home, to his brother my grandfather, letters and post cards from his boot camp in Georgia and from France where he was assigned as a Private to the 327th Infantry Regiment of the 82nd Division in the U.S. 1st Army. (The same Division as the famous Sergeant Alvin York.)

I had only a generalized idea about the war conditions and life of the combatants. That is, until I found ‘To Conquer Hell’ along with another book titled ‘America’s Deadliest Battle: Meuse-Argonne’ by Robert Ferrell (2007). Together these books trace the day-to-day, hour-to-hour events in the American 1st Army as it headed into the jaws of death against the mighty and final forces of Germany.

The conditions of the troops under fire were horrifying to say the least. From the book:
“The First Army was in sorry shape. On paper it totaled over a million soldiers in 17 divisions at the front and in reserve. Nearly 100,000 of these soldiers were, however, stragglers. Walking along roads, loitering at field kitchens, and hiding out in woods, the stragglers reflected the army’s abysmal morale…

“After three weeks of terrible weather and some of the worst fighting that any American had ever seen, the Doughboys had taken almost all they could bear. Some divisions had been reduced to about a quarter of their authorized combat strength…

“Thrown into battle with the same thoughtlessness that the French had shown, the Yankees attacked at dawn. Sixteen French tanks supported the infantry assault, but within minutes all of them had broken down or been destroyed. Slaughtered by Maxims (machine guns), the Yankee Doughboys could make no headway…

“One Yankee Private tried to rest in an old, deep German dugout during one frosty night in October, but the lice that swarmed over him made sleep impossible. In the dugout, he encountered a wayward straggler who said, ‘I have been through the whole thing and have never been a coward before, but I am now. I want to go home and I know that if I go over the top again, I will be killed’… 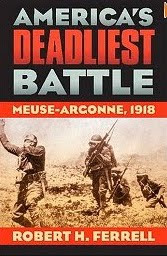 “The weary Doughboys of the 115th Regiment, weak from lack of food and with swollen and bleeding feet, stumbled up the wooded ridge…

“The Germans bombarded them endlessly, and the smell of poison gas made one want to vomit, as well as the stench of corpses in various stages of ripeness. When food arrived it was often contaminated with gas causing dysentery. Desertion and shell shock were rife, and morale poor. Yet the order to attack came again… the Germans massacred the infantry as they tried to advance… the inept artillery barrage sometimes fell on the Doughboys instead of the enemy…

Sergeant York also wrote later, “The Germans got us, and they got us right smart. They just stopped us dead in our tracks. Their machine guns were up there on the heights overlooking us and well hidden, and we couldn’t tell for certain where the terrible heavy fire was coming from… And I’m telling you they were shooting straight. Our boys just went down like the long grass before the mowing machine at home. Our attack just faded out… And there we were, lying down, about halfway across [the valley] and those German machine guns and big shells getting us hard.”

With all this devastation, one incompetent Major General wrote in his diary, “The men now are undoubtedly beginning to feel their own power…” While another officer more accurately noted “Smeared with mud from tin hats to shoes; bushy bristling beards on every face, full of mud too with red-rimmed, burnt-out eyes…”

But despite such appalling and deadly conditions the greater numbers of the AEF (American Expeditionary Forces) eventually out-flanked and out-gunned the Germans and drove them back, among them a “terrified 15-year-old boy soldier” that one Doughboy could not bring himself to shoot at close range.

“One American Division had lost 7,712 men as dead or as casualties from September 30 to October 27–not counting stragglers. Said one soldier in utter exhaustion, “I sat down for a few minutes and when we were ready to go I couldn’t get up. My legs just wouldn’t work.”

General Douglas MacArthur was there with his 84th Brigade. He led a reconnaissance to examine the German barb wire lines. While up front the men were hit with a German artillery barrage. When he looked up to give the signal to withdraw no one replied: the other men were all dead.

As for the commander in chief of the American Forces, General John Pershing, the author writes, “As a battlefield general, Pershing was mediocre. His management of the Meuse-Argonne offensive had been uncreative. His obsession with the cult of the offensive had shattered several American divisions and sacrificed thousands of men for victories that a little creative forethought might have won more cheaply…” He gave over his command on October 16 to a better tactician, General Hunter Liggett, the same day uncle John was mowed down by German weaponry on the front.

(Photo: within the Meuse-Argonne American Cemetery and Memorial in France, which covers 130.5 acres, rest the largest number of our military dead in Europe, a total of 14,246. Most of those buried here lost their lives during the Meuse-Argonne Offensive of World War I. A couple of years after the war, families of the deceased were given the choice of leaving their relative buried in France or bringing the remains home for re-burial in Arlington National Cemetery in Washington, D.C. Uncle John was brought back and now lies in Arlington.)

When I now think about John’s last harrowing days I am disturbed, mortified . He was a very moral and decent man. A naive patriot who followed the crowds in 1917 to enlist and “give the krauts a good lickin’ “. He and a million others had no idea what they were doing until he was thrown into Meuse-Argonne. In one of his last letters, he frightfully realized that “war is hell.”

This year, 2010, I visited the Meuse-Argonne battleground and cemetery in France. I heard only the wind whispering and the cows mooing. No guns, no tanks, no shouts of anguish, no bullets flying–and no John.