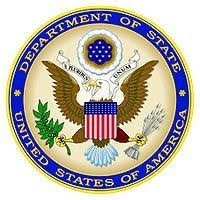 Now for some good news among the waves of homophobia swirling around these days, especially from Africa.

The new USA ambassador to New Zealand and Samoa was sworn in the other day. Not a major political jolt or international flap but a decidedly moving event considering that the new ambassador, David Heubner, is openly gay. He was given the oath of office by VP Joe Biden, our good friend, as Heubner’s ‘spouse’ Dr. Duane McWaine held the Bible for the ceremony.

Speaking after the swearing in, with the Vice President at his side, the new ambassador told the 100-plus people gathered that his grandfather came to America as an immigrant and his father worked for many years as a butcher. Observing this three-generation achievement Heubner said, ”I was sworn in next to a spouse of a different race and the same gender as I am. In America, such a trajectory is not only possible, it is natural.”

Heubner (photo left) joins the small rank of present and former openly gay ambassadors who have represented the USA abroad in a top diplomatic position. Two of whom I actively recall are James Hormel (Belgium), appointed by President Clinton, and Michael Guest (Romania), under Bush 2. However, Guest resigned in protest six years later after failing to persuade the State Department to treat partners of LesBiGay foreign doplomats in an equal manner as heterosexual partners. “This is not about gay rights. … It’s about equal treatment of all employees, all of whom have the same service requirements, the same contractual requirements,” said Guest.

Heubner will have a slightly easier time on this issue under the current administration which has already begun to offer more benefits to LGB partners, although still not fully equal.

At Huebner’s Washington, D.C. law firm, Sheppard Mullin, Huebner was head of their China Practice. Home town for the new ambassador is Los Angeles. He is expected to leave immediately for Wellington this week. I am not sure if his partner, Dr. Duane McWaine, a respected Los Angeles psychiatrist, (photo right) will accompany him at this time. New Zealand is along way to go to cuddle!

The diplomatic seal of the State Department under which Huebner will now travel as Ambassador is shown above.

Now the question is, when will a lesbian diplomat be offered the chance to take the same oath?