The Complex Mind of a Nobel Prize Scientist, Demonized as a Pedophile

This is a very sad story of world-class Nobel recipient gay man whose decades-long research made significant discoveries into a degenerative brain disease that struck particularly at children known as kuru–now known as the deadly Mad Cow Disease.

For his work on kuru,

(Sept. 9, 1923 – Dec. 12, 2008)shared the 1976 Nobel Prize for physiology and medicine. He used the $80,000 Prize money to set up a trust for the education of the Fore tribes in Papua New Guinea where he did much of his research. For over 30 years, he also adopted more than 50 boys and one girl from his expeditions to the Pacific and brought them up in America and supported their education.

During his decades in the South Pacific cultures, Gajdusek’s homosexuality was encouraged by local traditions of sexual contact between adult men and boys not yet of marriage age. (See Gilbert Herdt’s research about sexuality in Papua New Guinea). Far from the strictures of American sexual mores Gajdusek came to experience the ‘natural nature’ of male-male sexuality. 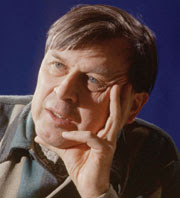 But trouble occurred in 1996 when one boy, then an adult, reported that Gajdusek (photo right) had sexually abused him when under his charge. The doctor was arrested in the U.S. Eventually seven people came forward with similar accusations. Other adoptees of his came forward with testimonies describing him in affectionate terms and describing him as their hero and savior. He was 74 years old. His attempt to justify the contact by claiming “sexual contact between children and adults is the most natural thing in the world” was of course rejected and only served to have him demonized as a disturbed pedophile. He denied the contact was ‘abuse’ but he was in the wrong culture for such a claim.

In a plea bargain, ameliorated by his esteemed worldwide reputation, he was sentenced to one year in jail after which he was allowed to travel to Europe to continue his research into virus-borne diseases. He died eleven years later in Norway while visiting colleagues.Gajdusek was an important pioneer in research that contributed to progress against measles, Alzheimer’s and Parkinson’s diseases, and polio and malaria.

In 2009, a documentary title The Genius and the Boys was shown on BBC television that portrayed Gajdusek’s seminal medical work and his eventual conflict with the law.

What was this brilliant gay scientist thinking to bring his youth-loving behavior into the U.S. where pedophilia was a highly sensitive and prohibited act? Did he think he was immune to the law because of his fame and stature? Was he reckless or naive or blind to the American cultural attitudes about adult-child sexual contact, which stigmatized such behavior? Had he spent too much time in the South Pacific and become too deeply imbued with a different sexual ethos that he could not re-form his behavior? Or was he delusional in his affirmed belief and desire about ‘age-structured’ sexuality? (See ‘Homosexualities’ by Stephen O. Murray)

It is intriguing to read about a highly intelligent mind that was obsessed with intellectually complex scientific analysis and also be desirous of sexual desire for the youthful male figure; the Greeks called such desirable figures ‘puer’. It is a recurrent artistic archetypal figure through recorded human history and is present in all major museums’ sculpture collections. Today’s fashion and photography industries celebrate, indeed adore, such figures in full color and with millions of dollars.

Was Gajdusek a victim of ‘puer eternus‘ desire that springs from unknown inner psycho-sexual depths of the soul? Did he have a choice in his urge to caress youthful beauty? Most likely not. Sexual desire–gay or straight or both or in between–comes from a mysterious source in the human psyche. Unfortunately or not civilization stamps particular acceptable and unacceptable standards of morality and legality on human sexual desire and many get caught in the forbidden zones of that web. Gajdusek clearly did, despite his great intellect that saved the lives of countless other puers around the world. He clearly loved youth in more ways than one.