Richard Ammon
GlobalGayz.com
I recently traveled to Russia where I visited three cities: Moscow, St. Petersburg and Tula.
Tula?
It’s hardly a tourist hotspot, but this industrial city 120 miles south of Moscow is the location of a world renown site that has become a shrine of sorts for intellectuals, students and lovers of Russian culture. Just outside the city center is a sprawling estate of gardens, fields and forests and a few fine mansions. The estate is known as Yasnaya Polyana.

In the middle of this sylvan glen is the house that was once the home of Leo Tolstoy (photo right), the writer widely regarded as among the greatest of novelists. “His masterpieces ‘War and Peace‘ and ‘Anna Karenina‘ represent in their scope, breadth and vivid depiction of 19th-century Russian life and attitudes, the peak of realist fiction.” A description of his life an work can be found here.
A mile down a footpath is his grave set among tall pines. He died at a small village train station–Astapovo station–in 1910 after leaving home in an agitated state in the middle of winter at the age of 82.
But the drama of his last year (depicted in a 2009 movie, ‘The Last Station‘, directed by Michael Hoffman starring Christopher Plummer as Tolstoy and Helen Mirren as Sofya Tolstoya) was not in my mind as I toured his house at Yasnaya (photo below left) where his personal effects give the place a feel of still being inhabited, including bed clothes, countless volumes of books, wash pails (he cleaned his own room), walking stick and family photos. And of course his writing desk, an ‘altar’ for writers, on which he composed his great works as the thoughts came up within his imagination and memory. Late in life his wife purchased a big Remington typewriter. In another room is a phonograph personally sent to him by Thomas Edison.
Next to his bed is a pad and pen in case ideas arose during the night, no doubt frequently. His was a mind alert to nuances, disparities, absurdities, unfairness, dramatic urgencies, futility and the emotional contagion of the human condition. 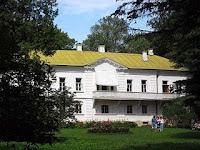 Walking among his household belongings and feeling the ambience of his life and the breadth of his mind, I felt humbled and rather envious that I have lacked the discipline across my lifetime to create such fine works, writings, that dissected and described human behavior in the poetic narrative form known as the novel–or even in a non-fiction documentary. Great writers and music composers have an immortality among human civilization on this planet that I admire and desire–a feeling dispelled only by looking at the stars in the universe where true immortality lies.
The visit to Yasnaya was inspiring and serene–and grounding. Immediately across the street from the columned entry to the estate was the homey Cafe Preshpekt that served delicious solyanka, a hearty Russian vegetable soup with chicken or beef. It too was life affirming.
Nearby is a language school for modern day students that includes the Yasnaya Polyana Hotel where I stayed for four restful days. There is also a conference center that hosts the International Tolstoy Conference each year in August..