Once again we are humbled and infuriated that yet another courageous gay activist has been gunned down for his human rights work. In a previous blog we considered the irrational persecution and killing of LGBT (gay) people across the world and how human fear and hatred make us inhumane.

The illegal coup in Honduras has taken many lives in the name of political idealogy. Many of the dead will be remembered by only a few family members. Some of the outspoken courageous ones will be mourned across the world. Walter Trochez is one of these.

From: Radio Mundo
December 14, 2009
25 year-old activist Walter Trochez was murdered Monday in Tegucigalpa. He was a gay rights advocate and a member of the National Front of Resistance against the Coup in Honduras.

Trochez, who had publicly reported the abuses of Roberto Micheletti’s de facto regime, was shot in Tegucigalpa’s downtown. A few days before his death, he had been brutally beaten by officers of the dictatorship while they were interrogating him to extract information about the leaders of the peaceful resistance. 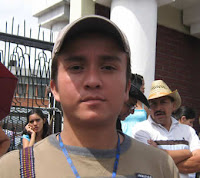 The activist had recently published an article exposing the de facto regime for its human rights violations. The article, titled “Increase in hate crimes and homophobia towards LGTB as a result of the civic-religious-military coup in Honduras”, was about how what is currently going on in Honduras is a step backwards for the most inclusive processes that have been taking place in Latin America in the recent years. (Full text in Spanish of Trochez’s open letter here.)

“It is worth stating that the explicit support of the church in Honduras to the military coup of June 28, 2009 prevented holding a referendum organized by the legitimate constitutional government, while it put dictator Roberto Micheletti in power”, reads the article. It also explains that homophobic hate crimes have increased since the coup, promoted by the Honduran church, with the complicity of the oppressing groups.

“Once again we say it is NOT ACCEPTABLE that in these past 4 months, during such a short period, 9 transexual and gay friends were violently killed, 6 in San Pedro Sula and 3 in Tegucigalpa”, said the activist in his article, following several press releases of the gay, lesbian, transexual and bisexual community.

The young activist finished his article saying “As a revolutionary, I will always defend my people, even if it takes my life”.