The Most Profound Lesson of all Human Survival

Here is the latest on the front line of Russia’s gay rights struggle:

Russia: Protest Over Gay Rights
By Reuters News
September 21, 2010
At least eleven gay-rights activists were taken into police custody on Tuesday at a protest calling for the arrest of Moscow’s conservative mayor, Yuri M. Luzhkov, left, a longtime opponent of gay rights. The rally was timed to observe the 74th birthday of Mr. Luzhkov, who is locked in an increasingly public struggle with the Kremlin over his job after 18 years as mayor of Russia’s economic powerhouse, a struggle that is testing President Dmitri A. Medvedev ahead of national elections in 2011 and 2012. The mayor has described homosexuality as satanic. There is little public support for gay rights in Russia, where the dominant church frowns on homosexuality…”

Gay Rights Icon in Russia Tells of Abduction
By Michael Schwirtz, New York Times
September 20, 2010
Gay rights advocate Nikolai Alekseyev says, he was kidnapped by people he believes to be members of Russia’s security services and held for two days at different locations outside Moscow where plainclothes officers threatened and verbally abused him. Mr. Alekseyev disappeared Sept. 15, sending ripples of anxiety through Russia’s small and embattled gay rights community and prompting statements of concern from European Union lawmakers. He resurfaced two days later, saying he had been detained while trying to board a plane at Domodedovo Airport here… Back in Moscow, Mr. Alekseyev said he still had little idea exactly who was behind his detention. The men never identified themselves, and Moscow’s tight-lipped police force has issued no statements on the matter…”

These stories may seem trifle bits on the world scene of bigger events such as war and economic recessions but these smaller issues are the true measure of a country’s civil progress in modern times. In America, the on-going debate to remove the military’s DODT policy was blocked by Republican’s yesterday; the Vatican’s persistent demonizing of homosexual orientation continues unabated; Russia’s vehement opposition and roughing up of gay rights demonstrations; Indonesia’s recent near-violent cancellations of a gay IGLA conference; continuing killing and injury of anyone suspected of being gay in Iraq, Iran, Afghanistan, Sub-Saharan Africa…across to Papua New Guinea and in Jamaica where violence against gays is encouraged. 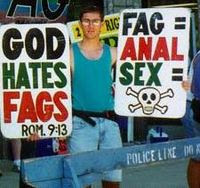 In the world of human affairs, homosexuality continues to fracture the surface of traditional cultures to reveal a common irrational force within the ordered way of life in ‘civilized’ societies. Such strange arousal of hostility is poorly understood by aggressors who don’t want to know the reason for their behavior–commonly a knee-jerk impulse to strike out or curse the person who comes out with their sexual truth.

Why does this truth evoke such anger, rejection, violence and discrimination? Why does sexual diversity create such aversion in societies that otherwise display diversity in many other forms such as hair style, clothing, religion, literature, art, politics, language and professions. Diversity is a hallmark of human affairs, as in other animal and plant life forms. Diversity is inherent in all genetic life including inherent diversity of sexual expression. Civilization is diversity and variety. Nearly all of it is tolerated and appreciated–except sexual diversity. The degree of active suppression of sexual diversity is a measure of a culture’s evolution (or lack if it) toward social improvement, political intelligence and higher consciousness.

This leaves few countries on the planet with a clean score. A fortunate few have legislation that coerces citizens to be tolerant and non-discriminating and penalizes violence against sexual minorities. Yet even here it takes enforceable laws to demand full-spectrum respect for diversity.

Fear of Differences
The source for all this homophobia worldwide is essentially a fear of different-ness, a fear that civilized self feels within its own nature; a fear that resides in the recesses of the evolved human brain. Because we are still evolving we remain connected to primitive forces that developed long ago to protect the human animal against threats from ‘otherness’, from imagined and real danger. Outside the clan, herd, pride, flock, gaggle or tribe of familiar knowns, all otherness is suspect. No human tribe has ever been freed from this primitive arousal against the unknown, against strangers. Hormones of hostility–survival desire–instinctively kick into motion and fists, sticks, stones, guns, missiles, lethal gas and weapons of nuclear destruction have accompanied us into modern times to protect us against ”them’.

Today there are hundreds of hostilities being acted out between races, ethnic groups, religious sects, political factions and sexuality opponents in vain efforts to eliminate differences–to find peace through war. However, no matter what the method of attack or how widespread the genocide, virtually no human group has ever succeeded in eliminating its ‘enemy’ by violence. Tutsi, Armenian, Jew, Native American, Australian Aborigine, Muslim, homosexual–we are still here, still standing despite horrific tortures, atomic weapons, laws and fire. We are still diverse and still present. (Maybe pollution and climate change will change all that!)

It appears we are not willing to learn the lesson from all this pain, the lesson of compromise, inclusion, cooperation and tolerance that would ensure far more peace off mind among diverse humanoids than war can ever provide. We appear more willing to attack, oppose, create chaos and death than we are willing to learn the most profound lesson of all human survival–acceptance and cooperation among people of difference. Sexual diversity is one of the litmus tests of civilization. When homophobia is resolved, however it can be, humanity will have learned the ‘secret’ of peace on earth.
——–
See this article for an antidote to hostility: http://www.nytimes.com/2010/09/27/us/27happy.html?hpw