Memorial Day 2010: An Elegy for a Soldier Dying Young

By Richard Ammon
GlobalGayz.com
MemorialDay, May 31, 2010

Ninety-two years ago my great uncle, John Ammon (photo right), had his young life taken from him in a 1918 World War I battle (St. Georges, France), less than 30 days before the armistice that ended the carnage. The total number of Americans killed and wounded numbered about 330,000. (The total number of deaths and injuries for all countries involved in that war is close to 30 million.)

In a short biography about Uncle John we wrote: 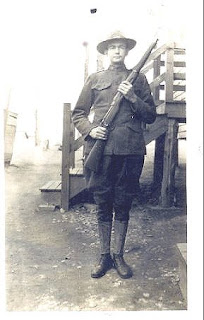 “How are people remembered after they die? Unless blessed or cursed with fame or infamy, the departed are usually recalled in family photos, memories and in the recollections of friends for a while until the last ‘I knew him’ is buried.

“Silence and forgetting move in like the afternoon fog. Who of us recalls our grandparents or great grandparents even if they lived into their late eighties? And what about the many countless folks who died without offspring or without any important artifact of their fourscore years of walking the earth?

“And what about those who die young and virtually unnamed in the nightmare of warfare?

“The brother of my grandfather Francis, Uncle John Ammon (born June 11, 1888; photo above) was neither a rebel nor a rich man, and was not well known. He was killed in France as the was ending. He was 30, not married and not a father. Yet he didn’t die wholly anonymous. Instead of children or fortune he left a modest paper trail of his life in the form of photographs he took before the war as well as postcards and letters he wrote to his brother Francis during his army time up to within a month of his death…”

John wanted to join the forces and serve his country. It seemed to him and thousands of others the right thing to do. He was upbeat and reliable, a man of honesty and compassion. But such things don’t count on the battlefield where human beings are reduced to stick figures with a weapon, a mere silhouette to be eliminated.
(photo: American 23rd Infantry Regiment in action at Belleau Wood, France, June 3, 1918) 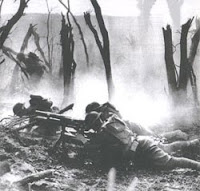 But back home that same stick silhouette is a fully-fleshed person with deep meaning and attachment to family and friends. Add to that bond the mysterious inner force that urges that young person, motivated by a protective duty, to join a dangerous cause in which death is a real possibility. Overzealous as many young men and women were to ‘fight the krauts’, in his private moments I feel John clearly knew he was on a risky path far away from home and facing hard living in tents and ditches. But he went forward and obeyed orders because it was right for his country and his family.

His sacrifice rings in my mind to this day. He went to war for a bit of adventure, perhaps, but more out of a sense of protecting his family from harm. He grew up in an orphanage and knew well the loss of protection, being in a world with no security other than his own making. There was a higher cause to his sense of life, a cause that spoke to him out of his own damaged childhood that life must be guarded and deliberately forged by effort and determination;a good life was not something you were ‘entitled’ to, that got handed to you at no expense. You worked and made a life, for yourself and your loved ones. And if that work called for sacrifice then you made it and held on as long as you could.

And that’s what he did until his end. His gift to me, three generations later, is the freedom I have today to choose my life and express who I am as a citizen, friend, lover, brother, son. All the things he gave up.

I remember him with bowed humility and deep gratitude on Memorial Day 2010.