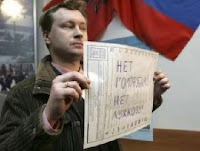 The fifth attempt to hold a Moscow Pride parade was launched today in the Grand Ballroom at the Lesnaya Holiday Inn hotel in Moscow.

“The courts today rejected our appeal against the banning of three Gay Pride rallies. We asked to hold these rallies in central Moscow this Saturday 29 May. Now we go to court on Friday in a bid to overturn the Mayor’s ban on holding a Gay Pride march through Moscow on Saturday,” he said.

Organizers are not hopeful that the ban will be revoked.

“The Mayor’s reputation and authority is at stake. He has refused us for the last five years, ever since our first attempted gay parade in 2006. I hope he will change his mind but I doubt it. Mayor Luzhkov is not a great lover of democracy, human rights or gay people. Whatever the courts decide, the right to protest is guaranteed under the Russian constitution and we intend to exercise our rights,” added Mr Alekseev.

Today’s Moscow Pride launch and press conference was attended by international delegates and speakers, who were there to support the Russian gay activists, including Volker Beck, the German Green MP; Louis-Georges Tin, founder of the International Day Against Homophobia and President of the IDAHO Committee; Andy Thayer, the US gays rights activist; and Peter Tatchell, coordinator of the British gay human rights group OutRage! and human rights spokesperson for the Green Party of England and Wales.

Mr Tatchell told the press conference:
“The ban on Moscow Pride is illegal and Mayor Luzhkov is a criminal for banning it. He should be put on trial for violating the Russian constitution. The real criminals are not the organizers of Moscow Pride, but the mayor of Moscow and the judges who uphold this illegal ban.

“President Medvedev and Prime Minister Putin are colluding with this ban by failing to order it to be overturned. I call on the Russian President and Prime Minister to show leadership by publicly condemning the ban and by calling on the mayor of Moscow to lift it. They should ensure freedom of expression and the right to protest to all the citizens of Moscow and Russia, gay and straight.

“We are here to defend the human rights of all Russian people. Many different rights have been violated by the authorities. It is not just gay people whose freedoms are being trampled on.

“Russia is a great nation with a proud and great history. Many important figures in Russian history have been gay or bisexual, including Sergei Eisenstein, Peter Tchaikovsky, Rudolph Nureyev, Sergei Diaghilev, Modest Musssorgsky and Nikolai Gogol. The gay contribution to Russian history deserves to be acknowledged and celebrated, with pride,” said Mr Tatchell.