Today’s New York Post carried the following story about the newly published book Gay Travels in the Muslim World. The book is a collection of articles by traveled writers familiar with homosexuality in the world of Islam. It was edited by veteran journalist Michael Luongo of New York. 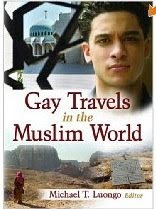 It seems that the Jordanian publisher that put out the Arab-language translation used an old Arabic word that translates into “pervert”, which was once commonly used to describe gay people. Considering that there is already a pervasive and largely hostile attitude about gays in Muslim countries, this is bound to make life MORE difficult for gay people in these countries.

GlobalGayz writer and owner Richard Ammon contributed a chapter to this book, based on the tragic experience of a friend’s murder in Morocco. Ammon met the deceased, George Waldo, several years ago and interviewed him for story about gay life in Morocco. (See Gay Morocco story)

In Gay Travels in the Muslim World, the violent incident is described in its various complexities of culture, sexuality, money, religion, fantasy and betrayal.

Said Ammon, “It is doubly regretful for me to have this book, an honest testimony of gay Muslim life, have its title mistranslated with the use of a pejorative term that demeans gays. It is regretful that we have come so far in the struggle for gay rights and recognition only to be publicly smeared by a single unaware Jordanian publisher. It’s doubly regretful that a dear friend and sophisticated gentleman’s life be included in such an unjustly labeled book. George deserves much better than this.”

Luongo said he has protested the mis-title and demanded a more modern and accurate title be used.