Brazil is a dazzle. Every aspect of this huge country overwhelms, challenges, stimulates or puzzles the first time visitor, which I am. 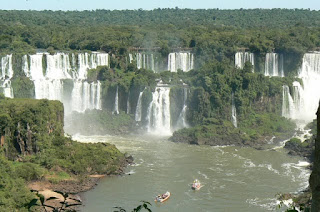 I came for three full weeks and each day has been a unique chapter in my memory book–even just driving a car on the main highways here. Brazil decided decades ago, unfortunately, to invest in roads instead of railways, thanks to the lobbying influence of the oil, rubber and auto industries. The result is that today tens of thousands of heavy cargo trucks–6 to 24 wheelers–blaze along the highways making pleasure driving anything but. But that’s another whole story. (photo above: Iguacu Falls)

My story is about LGBT life in Brazil which is also a lesson in overwhelm. There are hundreds of lesbian, gay, trans and bisexual organizations in this country, mostly in the major cities along the Atlantic coastline which stretches over 4000 miles south to north. There are dozens and dozens of cities, large and small, gigantic and tiny and virtually most of them have some kind of LGBT social life and activist group worthy of respect and praise. This despite a larger national milieu that is Catholic and Evangelical and homophobic that tries to block any pro-gay legislation in the congress. 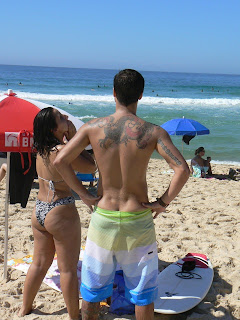 So the clever LGBT strategists have turned to the courts to work their will. By presenting numerous law suits to state and federal judges on behalf of issues such as immigration, employment, inheritance or same-sex relationship recognition a number of important ‘rights’ have been gained–without congressional approval. So these few rights gained are judicial not legislative and activists want those decision written into the country’s statutes since court decisions are always subject to challenge and are sometimes overturned. (photo left: Florianopolis gay beach)

Meanwhile the presence of LGBT organizations across the country has mushroomed to the point where the organizations now have a ‘meta-organization’ that helps coordinate them all. Such an umbrella organization is called ABGLT: The Brazilian Gay, Lesbian, Bisexual, Transvestite and Transexual Association, founded in 1995. Today, ABGLT is a national network of 203 organizations, of which 141 are gay, lesbian, bi and trans groups, and the remaining 62 are collaborating organizations involved with human rights and AIDS. ABGLT is the largest GLBT network in Latin America.

Two hundred and three, or a hundred and forty-one to be precisely gay, is a daunting amount of information for a writer to consider when attempting to write a story about ‘gay Brazil’. Not to mention the spectacular natural environment of this country–the size of the USA–and 180 million people ranging from homophobic chic Mercedes owners to primitive jungle tribes with little outside contact some of whose spiritual practices are inclusive of homosexual behavior.

Where to begin? Next blog.