Yesterday I received the very sad news about the death of LGBT leader Keith Goddard, director of GALZ (Gays and Lesbians of Zimbabwe).

GlobalGayz was privileged to meet and interview with Keith in the spring of 2009. He was comfortable to be with, witty and thoughtful–and he was a force for change and human rights. We spent much of the day together including a ‘deluxe’ lunch at the nearby 40 Cork Road Cafe where we reminisced about our youthful coming out days (before Mugabe) and compared them to today’s society.

Keith was given a frail body but a strong mind and was unruffled about the oppression from the corrupt Zimbabwe government, having eluded serious persecution for nearly 20 years. He knew well how to steer GALZ out of harm’s way and still get the job done of health education all the while fostering human rights. The high wall surrounding GALZ home offices in Harare is both real and symbolic in protecting vulnerable LGBT people from discrimination.

I am very saddened by his passing. Please read the story about him and the courageous people of GALZ: http://globalgayz.com/country/Zimbabwe/view/ZWE/gay-zimbabwe

Here are tributes to this fallen leader, one from Behind the Mask (Africa), another from UK activist Peter Tatchel and one from Vikram from GayBombay.

From Behind the Mask:

“If more people in this world were as passionate about their beliefs and the cause they took up as Keith was, or even took causes up at all, it would be a very different place indeed. The Keith’s of this world are altogether way too rare.”

These were powerful words said during Keith Goddard’s eulogy in his funeral service held this morning, 15 october, at GALZ resource centre. Activists, artists and GALZ members came all out to pay their last respects to “a man who dared trade where angels feared.”

During the service, speaker after speaker spoke highly of Keith Goddard as a selfless man, who put his life on the line for what he believed in and sacrificed himself for the rights of lesbian, gay, bisexual, transgender and intersex people (LGBTI) people in the world.

In her speech, a close friend of the Goddard, Rosie Mitchell, described Keith as a courageous and remarkable man who touched so many people’s lives and made an impact. “Keith challenged all of us. He recognised in each of us, our individual moral weaknesses, our flaws and doubts, and he went for the jugular. In doing so he forced us to confront the parts of ourselves in need of examination and scrutiny, forced us to question, the way the world is, everything. He had fearlessness in his convictions that bordered on the reckless, and the world is better for that recklessness, for the world needs people like Keith and there are few enough of them, and they leave their mark”, Mitchell explained.

Echoing the same sentiments, Agrippa Sora, Director of Zimbabwe College of Music said Goddard was a humble artists who had committed his time and life to the college where he was not only a board member but a lecturer. “Keith came to the college when he was only 12 years old and he had a passion for music and contributed immensely to the music industry in Zimbabwe. He had even volunteered to teach ‘O’ level Cambridge music lesson to our new students in 2010. His death is a great loss to both the college and the students.”

Human rights activist and a board member of the Zimbabwe Human Rights Forum (ZHRF), Brian Penduka, added that Keith was a down to earth man and an activist who was dedicated to his work. “He would not demand any money for his work and was always available to do his duty as a ZHRF board member, he did not complain even when things were difficult he always offered to help. His death is a blow not only to the forum but to many human right activists”.

GALZ Co chairperson, Belinda Weale also said Keith make a great contribution to the Zimbabwean LGBTI community and fought tirelessly for the rights of the marginalised. “Today we mourn not only the death of a director but also an inspiration to the whole LGBTI community, as well as an active human rights activist all over the world. Keith has left an inexplicable void in all our lives and our work.”

During the service, some of Keith’s students played some traditional music instruments in his honour. Meanwhile the body of the gallant and veteran human rights activist and musician will be taken to Mutare for cremation tomorrow 16 October.

It is indeed a loss for the LGBTI community of Zimbabwe, human rights fraternity as well as the music industry. Fare thee well, Cadre. Rest in peace and may your star continue shinning down upon us, your legacy and your hard work will be cherished, we shall lift the banner of human rights high up!

Members of the British LGBT human rights group OutRage! extend their condolences to our comrades in Gays And Lesbians of Zimbabwe (GALZ) and to the family and friends of Keith Goddard, (photo right) following his illness and tragic death on 9 October 2009.

He was a true hero of the freedom struggle in Zimbabwe, and made a major contribution to GALZ’s campaigns and successes over a period of nearly two decades.

OutRage! is very proud and honoured to have worked with Keith and GALZ from the early 1990s onwards, supporting their many struggles against the homophobia and tyranny of the Mugabe / ZANU-PF regime.

When we attempted a citizen’s arrests of President Robert Mugabe, in London in 1999 and in Brussels in 2001, Keith offered his congratulations. He reported that these attempts had a positive effect inside Zimbabwe. They prompted, he said, the Zimbabwean media to interview GALZ many times and to report LGBT human rights issues to an extent that had rarely, if ever, happened before. Keith was usually the GALZ person interviewed and he used these media opportunities very effectively to challenge homophobic ignorance and prejudice – and to eloquently set out the case for equality.

we in a successful bid to put LGBT equality at the heart of the mainstream Zimbabwean human rights movement. He and his GALZ comrades have done magnificent work to build broad support for LGBT rights in a future post-ZANU-PF Zimbabwe, when Mugabe is history.

On a personal level, Keith was an immensely kind, generous, supportive, warm-hearted person. I remember some enjoyable evenings with him during his periodic visits to London.

A non-sectarian bridge-builder, he despised personal attacks and infighting. He was supportive of myself and OutRage! at times when others were not. In 2007, a number of African LGBT activists were goaded by false allegations into a signing a letter denouncing us. Keith refused. He knew, from many years of working with us that these allegations were untrue. We were very grateful for Keith’s honourable stand against political sectarianism.

Keith was also, like all GALZ activists, very brave: unafraid to take a public stand for LGBT human rights, despite police and government repression. He risked his liberty and life many times, speaking out against homophobia and transphobia, even though this marked him as a potential target for state and vigilante violence. The danger of kidnapping, arrest, imprisonment, torture and murder never deterred him. 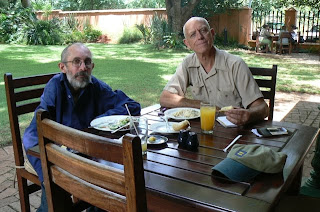 From GayBombay@YahooGroups.com
By Vikram
October 13, 2009

I just head the sad news of the passing away of Keith Goddard. Keith (left in photo, with Richard Ammon of GlobalGayz at ’40 Cork Road Cafe’ in Harare, 2009) was the really nice and very brave leader of Gays and Lesbians of Zimbabwe (GALZ) who continued to live in Harare (where he died after a short bout of pneumonia that was likely misdiagnosed) despite a level of overt hatred and harassment from Mugabe’s government that I can barely imagine being able to take.

But Keith was nonchalent about it. I met him when he was in India several years back – and I’m sure there are others who remember him from then. He had come for a conference and stayed in Bombay for a bit, and attended one of our parents meetings (the one we had at Mahalakshmi) and was much impressed.

I remember hanging out with Keith just before the meeting, and like with many visitors to Bombay I asked if there was anything he was particularly interested in seeing or buying. I thought he’d say fabric or tea or something like that, but he had something else in mind. “What I’d really like to buy is a pressure cooker,” he told me. “I’ve heard that India makes very good ones, and the fuel situation in Zim is getting so bad, it could be really useful.” So we went off and bought him a nice medium sized pressure cooker.

Despite the fuel problem, and the far worse threats that the thug Mugabe regularly hurled at gays, Keith was deprecating about the risks they faced. “Mugabe’s outbursts really helped us because suddenly people around the world realised we existed, and we started getting all these letters of support and also some funding from abroad,” he told me. And rather than moaning about Mugabe and the problems he had caused for Zimbabwe, he joked about it, and all the absurdities of Mugabe’s rule.

It still could not have been easy for Keith and GALZ. Such overt hatred is hard to take, and so is the knowledge that some of Mugabe’s war veterans could just come in and trash the place and perhaps even kill everyone, and nothing really could be done. At GALZ Keith would also have had to deal with the stories of young gay kids being beaten up and raped and knowing there was nothing much they could expect in support or redressal from the government.

It could have been so easy for him to have left, emigrating to Europe like so many white Zimbabweans did, fleeing to refugee camps in South Africa like so many black Zimbabweans were forced to. But Keith stuck it out and kept going with GALZ until his untimely death. I know Keith would probably have laughed at the idea of being considered a hero, but more than most people I know, he was.