Considering the Mayan Ruins in Honduras (and Human Hubris)

After 1200 years, the Mayan stones tell a mute story of empire and human dominance.

Teased out piece by piece by modern hands from the jungle’s clawed roots, from a millennium of rain and floods, baking sun and vegan onslaught, the exposed stones tell stories of kaleidoscopic religion, political intrigue and military hubris.

Unearthed over the past 130 years, the Mayan ruins are slowly being freed from the obliterating growth, including a 300 year-old banyan tree with tentacle roots outstretched for 500 feet in all directions. The roots lift and heave tons of stone carefully engineered into place by slaves and architects from 300-900 AD.

The stories reveal three hundred and fifty gods who existed, for believing minds, and ruled the known universe, governing harvests, sex and death.

Death came early for certain youthful Mayan men, especially winning athletes in the ball sport of ‘pitz’ as the victors were offered as human sacrifices to one god or another. The blood trickling down the sacrificial altar came from the decapitated head of the virile youth. The blood was collected and boiled. As smoky fumes rose into the air in devotion, the people allegedly felt a union with the divine spirits.

As I walk among these huge ruins and climb the Copan pyramids of power and exalted glory which the Mayans spread across present day Honduras, Guatemala and El Salvador, I am reminded of the poem ‘Ozymandias’ composed by the English romantic poet Percy Bysshe Shelley upon his viewing the high temple of pharaoh Ramesses the Great in Egypt (1303-1213 BC) in Luxor, Egypt. 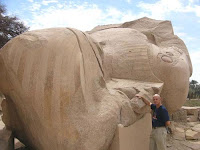 Before him on the ground, broken into pieces by earthquake and time, lay a colossal statue of the world-conquering pharaoh, about 54 feet tall weighing a thousand tons, covered in dust. I too stood in this place by this statue several years ago. (photo right; see my photo gallery.)

Regarded as Egypt’s greatest, most celebrated, and most powerful pharaoh, he ruled for 66 years and died in his 91st year. His kingdom spanned nearly the known world, from Syria to Libya. His subjects believed him to be immortal. But time is the great leveler and eventually his body (now mummified in the  Egyptian Museum), his power and his kingdom passed into thin air.

Shelley’s poem is a sarcastic reminder that all human power (and religion) is vain and temporary, whether Egyptian, Greek, Roman, Ottoman, Oriental, Western or American—or Mayan.

So today I stand atop these mighty Mayan pyramids and am reminded again of the vanities of human hubris.

I met a traveller from an antique land
Who said: Two vast and trunkless legs of stone
Stand in the desert. Near them, on the sand
Half sunk, a shattered visage lies, whose frown
And wrinkled lip, and sneer of cold command
Tell that its sculptor well those passions read
Which yet survive, stamped on these lifeless things,
The hand that mocked them and the heart that fed.
And on the pedestal these words appear:
“My name is Ozymandias, king of kings:
Look on my works, ye Mighty, and despair!”
Nothing beside remains. Round the decay
Of that colossal wreck, boundless and bare
The lone and level sands stretch far away.