The Days of My Life--What's Worth Doing

This week I cut down a thirty-foot tree, scraped layers of old paint from window frames, pressure-sprayed a brick wall, ordered 3 tons of gravel for the yard, saw the film encore of the

Metropolitan Operas‘ ‘Romeo et Juliette’ (Gounod), shopped twice for groceries and once for gasoline, bought a plane ticket to Bangkok in November, started to translate my 7 GlobalGayz.com Central American stories into Spanish, continued to read a biography of Tolstoy (photo right) after having visited his home in Russia earlier this year, went to the upstate New York home/museum of Edna St. Vincent Millay in Austerlitz, (photo left) bought house repair supplies at Home Depot, spent numerous hours answering e-mail for my website, had sex a couple of times with my partner (it’s late spring), had lunch with a cousin to plan a visit to France to the place where my great uncle John (photo lower left) was killed in World War I, arranged repair work on my air conditioner in my NYC high-rise condo… and many other small assorted activities of daily living such as going to the gym or doing a swim workout (preparing for Gay Games VIII)…

They’re called that, activities of daily living (ADL in health care terms). One after another in an endless stream of goings and doings that fill my days, my years. 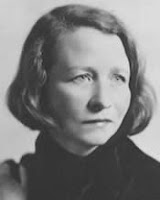 I used to not mind the ADLs since I felt I was accomplishing something–as a squirrel gathering acorns or building a nest. But now almost 70 years on I mind more and more the busywork of my life, looking for more important things to do such as writing this blog, or composing another story for my gay travel-and-culture website or reading a substantive book or magazine article.

The question is a tease since the meaning of ‘significant’ can’t really be defined.

The biography of Tolstoy is a tease with its 700 pages that includes an analysis of ‘War and Peace‘, which spreads across two thousand pages (took him 6 years to finish). The symphonies of Mahler (photo right) and operas of Gounod also tease me as obvious grand magna opi (plural of opus).

I regret very little in these past 70 years except for not having written a ‘great’ book. That to me is a meaningful effort, not a pulp novel but a thoughtful volume that probes into the dilemma of being human and being mortal–a worthy reflection at how to puzzle out the complexities of the social world and the mysteries of the physical universe.

Not that I haven’t written. My website contains dozens of stories about gay people around the world. They are small gestures at explaining human complexity, human gay complexities; for that I am content. But a large tome would be impressive in it’s scope and depth.

Impressive to whom? I think that’s more the issue here: impressing other people, being known, being acknowledged–famous. It’s the best superficial gain of reputation in one’s life, short lived as it may be. (hello Tammy Faye Baker)

Is ‘reputation’ meaning? For the shallow mind it is. But fame is as hollow as life is short; it exists only as a social act among mortal humans. Everything has or will pass into forgetting. I look at the countless books already on library shelves packed with obscure and trivial writings positioned by catalog number next to well-known ‘classics’ that still circulate often. The pages inside the covers were composed by individuals with a need to say something to other people, mortals writing to other mortals who read the print then put down the book and forgot it after a while–like most literature, music, dance and art.

It’s a sort of sweet but deceptive immortality because it is ultimately temporary–as are all human endeavors in the end; it’s the best we can do.

I personally like writing. It’s a creative doing vs the passive receiving of TV shows, eating, reading. Writing is verbal sculpture, creating something out of nothing, shaping sentences with felt words to express something not said before, or more accurately, saying old things in a new way.

That’s meaning for me: creating something out of nothing using imagination and inspiration. It’s the best I can ‘do and I don’t have to be famous to enjoy the feeling of generation.