I visited my 94 year-old stepfather over Christmas. He lives with his 93 year-old girlfriend. He’s my ‘step’ because he married my mother when they were both 75; they had good years before she died of lung caner—she smoked when she was a young parent; it was the fashion then. He took loving care of her and she died at their home.

Fourteen years later John is weaker but stable and he is dealing with another failing ‘spouse’. He’s not married to this woman (they’ve lived together for about 6 years) and he can’t care for her as he did my mother. So he is faced with a dilemma as to what to do. Ask her family (she has two grown children and some grandchildren) to place her in assisted living? Move her to one of their homes? Bring in daily help? John’s daughter, who lives nearby and frequently talks to him, has suggested the latter.

She’s difficult and resistant at times and neglects her own hygiene. She doesn’t eat and drink adequately. It bothers John to nag her to eat, drink or bathe. He didn’t say it aloud but it was obvious during my visit that he is tired of her and would rather not be bothered with her care. Let her family take over.

It’s sad to see this bright and spunky woman fade but her body is deteriorating and John is not up to 24/7 care and he is not legally bound to her. Therein lies a quandary. With no legal ties to her and with former affection obviously worn out, what’s he to do?

As we talked about this, the conversation felt somewhat mean-spirited, as if the ‘friend’ was a visitor who had overstayed her welcome. Without the ritual of marriage and the legal papers to ‘seal’ his bond with her the situation is different from with my mother (also, my mother was more easy going and easier to care for). He is ready to see lady friend go—not to die, but to see her live and be cared for elsewhere.

I can’t generalize this situation too far but I wonder how this (heterosexual) partnership compares to a gay relationship where there is no marriage license. Nearly every enduring gay partnership lacks the legal document of marriage, even in this age of gay marriage. Most of us don’t expect it; it’s not a norm, not a tangible bonded contract ‘for better or worse…’ yet many long-term couples I know remain tight into old age, through illness and unto death. 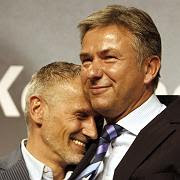 What’s the difference? Just a piece of paper? One relationship seems separated by the lack of the paper and another seems tightly bonded by the lack. I have seen numerous long-term gay partnerships move toward the ‘final stage’, especially in the generation of AIDS, and I’ve not seen a dynamic similar to my step-dad’s. These gay couples stayed close right to the end. (To be fair, I do know of a recent older straight non-married couple who hung in there to the end of the male partner; but there was a lot of money to be gained afterward and they were together for almost 30 years. So perhaps it’s not an equal comparison.)

If John and lady friend were married I know he would not be saying these things about her presence in his life. Such is the symbolic power of marriage on the affairs of hetero people and such is the enhanced force of non-married love and commitment needed to surmount its absence.