The Toxic Reach of Caribbean Homophobia --Against Straight Children

The long reach of Caribbean homophobia does not only effect gay people. It also has a toxic influence on young (mostly heterosexually inclined) schoolboys who purposely under-achieve in school in order not to appear too smart which is considered a girlish and gay trait. 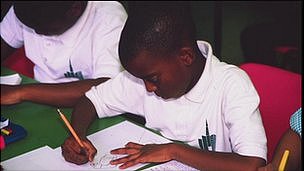 These comment are the result of a 2011 study of school-age boys in the Caribbean country of Jamaica entitled ‘African-Caribbean boys would rather hustle than learn’.  This startling and unexpected observation was made by Adolph Cameron,  head of the Jamaican Teachers’ Association. He said, “in Jamaica, where homophobia is a big issue, school success was often seen as feminine or “gay”. Cameron’s words were reported by Hannah Richardson, education reporter for the BBC News (20 October 2011).

Homophobia has many consequences which are often are reported as verbal hostility or physical violence against LGBT people virtually everywhere in the world. Blood, police, law suits or hate crimes are often involved in these incidents.

But this Jamaican study cuts deeper and wider to include underage children–straight underage children for the most part. To avoid any hint of femininity in their behavior, young boy students undercut their future by pretending to be less able as students and therefore more macho and street smart.

The damage of such thinking crosses national boundaries, from the Caribbean to England where ethnic Afro-Caribbean children are among England’s poorest school achievers. This is a humiliating and shameful finding which speaks to the challenge not just to teachers but to parents–from whom much of the homophobia derives. Little do such parents suspect the gossip against gays is actually harming their own children.

Another layer of this disturbing study is the use of the English language itself. Cameron also reported that boys in Jamaica intentionally underachieve in literacy tests “because the tests were carried out in standard English, and to speak in standard English is considered a woman’s activity”. The macho thing is to speak street creole.

I doubt any religious or political leader who encourages homophobia has ever considered this terrible ironic repercussion that reaches across generations to perpetuate underachievement and poverty. It is nothing short of child abuse by any adult who encourages discrimination against gay people by stereotyping them as feminine.

Not fully addressed here, but strongly present, is the pervasive denigration of women, since not to be macho is to be feminine, as if there is something less or weak about women that is to be avoided. This issue is universally charged with controversy from Asia to Africa to the Caribbean where it takes an irrational toll on women’s personal lives and on the larger women’s equality movement.

Homophobia is evil–and evil begets evil against the smallest of us, our children.

Boys are more interested in hustling, which is a quick way of making a living, rather than making the commitment to study”

He continued: “I would not be surprised if here in England the same or similar things occur in terms of how they feel about themselves and how they respond to and with respect to the society around them.

“Boys are more interested in hustling, which is a quick way of making a living, rather than making the commitment to study. This is a supposed to be a street thing which is a male thing.

“The influence of this attitude towards masculinity seems to be having a tremendous impact on how well African-Caribbean and Jamaican males do.

“There’s a fear of being categorised as gay in a society where homophobia is so strong.”

Mr Cameron said the issue needed further investigation but there was a growing realisation among teachers in Jamaica that they needed to tackle it in schools.

Christine Blower, general secretary of the NUT, said: “There are obviously issues for black boys both in Jamaica and the UK. We need system-wide reform to ensure that the system does not disadvantage black boys.

“Experience tells us that some black boys do achieve, and what we have to do is replicate those systems which enabled them to achieve success.”