Some Portholes of Light in the Sewers of Homophobia

Some portholes of light in the sewers of homophobia around the world this past week: Zimbabwe released from jail, on bail, two GALZ (Gays and Lesbian of Zimbabwe) staff members (Ellen Chadehama and Ignatius Mhambi) after being arrested on trumped up charges of ‘undermining the authority of the President’. Then in Malawi the infamous ‘gay couple’ Stephen and Tiwonge, held in prison since December ‘09 for getting engaged, then convicted and sentenced to 14 years hard labor for ‘un-African behavior’ were pardoned by the President of Malawi, Bingu wa Mutharika, with UN Secretary Ban Ki-moon by his side urging the pardon. 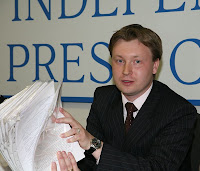 And yesterday the Moscow gay Pride events happened without arrests or violence. They were stealth happenings and the police couldn’t find the locations quickly enough before the activist dispersed. (photo right. Moscow leader Nikolai Alekseev)

We might call these good news events but they are not bright lights, more like candles in the darkness. I am certainly glad for the immediate relief from agony and assault.

But given the contexts of these moments, there will be consequences to follow. The Zimbabwe ‘2’ will be taken to court and insulted and libeled for their humanitarian work by a very corrupt legal system. The Malawi couple will never be able to return to ‘normal life’, impoverished as it was without public scrutiny and having to hide in a safe house and possible asylum in South Africa.

In Moscow the guerrilla tactics of gay Pride will continue to have only limited effect on an indifferent population whose authority figures hate gays as much now as they did in Soviet days.

This is not to diminish at all the bravery and passion of those LGBT activists on the front lines of this most horrific culture war, third behind the culture wars of religion and tribe. (It’s daunting to consider how many ways people have of tearing at each other.)

The efforts of LGBT individuals and organizations to push beyond the prejudice of discrimination, stigma and rejection—the war—is not being lost. Lives are, but the cause is just and world being awakened by these heroic ‘act up’ event at different paces in different places to the reality that homosexuality exists, that it is not a disease and that gay people deserve some consideration of understanding if not equality.

Stephen and Tiwonge in Malawi became accidental poster boys in their own country for declaring their love for each other and for being homosexuals in a society that tries to deny there are such people. And they also became poster boys for the much wider international cause of human rights and the injustice meted out to minorities in many countries.

Stephen and Tiwonge (photo left) could not have imagined the worldwide reverberations of their local engagement ceremony in their little rural village in remote Malawi. But now they do and so does virtually every one else in Malawi. Suddenly, shockingly, the country knows what homosexuality is and that it exists there and that the assumed norms of homophobia and denial are not acceptable to modern international standards. Life has moved on beyond post-colonial Africa to become more enlightened and freer.

Stephen and Tiwonge could not have imagined that the United Nations Secretary would personally intervene on their behalf to help pry open the mind of the Malawian President, just a little, enough to pardon them while still holding on to his unexamined and distorted belief that homosexuality is immoral and un-African. But that small opening is enough for the moment. The human mind is not an easy thing to reshape when faced with its own ignorance and self-righteousness. So we take small steps.

And that is what is happening around the world to awaken closed minds to the reality of human nature’s many truths and sexual diversities. Whether intentionally provoking attention and anger in Russia or accidentally causing a furor in Malawi or quietly advocating safe-sex in Zimbabwe the greater cause is just. Human nature desires peace and justice in the privacy of home, in their neighborhood, in their country as much as they desire comfort and warmth and acceptance. But politics, religion, mythic traditions have swayed people away from such inherent peaceful ways of being with fear, suspicion and hatred of things and people who are different in their own politics, religion, traditions—or sexuality.

Countless governmental and non-governmental organizations foundations exist around the world to bring peace, water, food or medical cures to the needy all in the name of kindness and humane justice. Gay rights activists—deliberate or accidental—are doing no less to help illumine the world.

I am humbled and grateful to the GALZ staffers for their diligent health efforts, to Stephen and Tiwonge for their agony and to the Russians for their courage.