Sex! A Prescription for Aging

My partner and I had sex the other night.

I am almost 70. My partner is almost 59. We have been together for more than 20 years. Our sex was comfortable and pleasing and unplanned as usual. In the afterglow and a while later, I wondered that our little tryst defied certain cultural myths about sexual energy—that it diminishes with age and flattens out over time with the same partner.

Shouldn’t it? After a lifetime of moderate carnal experience shouldn’t my sexual energy be on the wane along with my muscular strength, my eyesight and mental acuity? I can’t run as fast, lift as much or endure as long as I did in my thirties. And in these matters I have adjusted downward both my behavior and my expectations.

But, strangely, my sexual energy has not diminished significantly and certainly has not flattened. Looking from the other ‘end’, from my twenties, I could not imagine ‘old people’ having sex; it was something that faded away or shriveled like going bald or forgetting recent events. Yet here I am—here we are—still intermittently charged to give it another go with the same guy.

Why?, I ask. Is this actually unusual? Perhaps not. And is this consistent across gay and straight orientations? How is it that a partnership maintains a repetitive sexual activity over many years? “Love” is the oft quoted reply but I have further thoughts.

I wonder if it has to do with the alleged ‘gay lifestyle’? Nearly all gay men I know, from twenties to seventies +, enjoy viewing sexy other men of different ages, races, shapes, colors, hair styles, muscle size, and a hundred other variants of appearance. (And I presume (?) the same for lesbians as well.) I irregularly swap internet photos of handsome specimens with half a dozen friends and they in turn swap with others. (On the other side of this, I am endlessly amazed at the countless ‘charged’ people who like to show off their bodies with stills or videos to a huge and anonymous public.)

Curiously, most of my fellow swap-mates are also in long term relationships which makes me wonder about their sex drives and if there is a correlation—or not–between this sort of stimuli and their private bedroom behavior. I can’t say there is a direct correlation for me. Exchanged photos are only occasional and sporadic. My activity with my partner is also occasional as well but does not follow in sequence upon the arrival of a hot fresh image of an appealing ephebe au naturale. 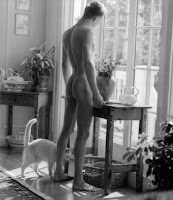 What the photo or video does is keep the ‘matter’ fresh. Almost like taking a vitamin supplement, a photo or a real-life beauty doesn’t jolt me (except for a rare one of exceptional quality) but more often it helps maintain an on-going level (a ‘minimum daily requirement’, if you will) of hormones as a re-energizer–a sort of light charge.

But I digress. The point here is sexual energy in ‘older’ gay men and how the current keeps charged. A close friend, aged about 70, insists that being sexual—online and offline—keeps his mind and body alert with a sense of vitality and aliveness. The opposite of withering.

And it’s not just the encounter that’s involved here; it’s also the readiness to allow it, the willingness to invite it, the ability and agility of mind to acknowledge the affirming energy of sexuality, even when it does not particularly look for or lead to an encounter, such as viewing a water-polo game. There is a ‘pleasant awareness’ in the event, not unlike acute listening for birds’ songs in a forest or aesthetic alertness to the ambiance of a sunset moment.

As we age, I and my peers value our health and take responsibility to maintain it with diet, exercise, preventive health care, cultural stimulation, productive interests that include hobbies, travel, creating art–as well as sexual stimulation.

Not a bad prescription for getting old, eh?

And I think the same goes for lesbian women!