Love Among the Ruins: USA, an Indian Prince, Love & HIV

While America was limping from the loss of two important marriage-rights elections (New Jersey and Maine), across the globe in India there was a cause for celebration of sorts.

Prince Manvendra Gohil, the famous ‘gay Prince’ from Rajpipla state in the western Gujarat area of India announced last night to an audience in Sydney that he had found his “soul mate”. Addressing a forum sponsored by ACON, Australia’s largest community-based LGBT health and HIV/AIDS organization. 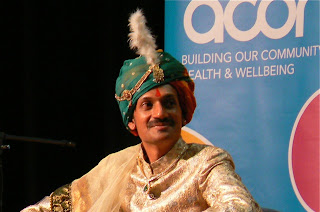 During the two-hour conference, Manvendra answered many questions to put him from Andy Quan of ACON and from an attentive audience about his personal life and his HIV charity work in his home state. Some questions focused on his history as the only royal personage to come out as gay, in 2005, and his subsequent rejection and acceptance by his family, the media and the people in his ‘realm’. (His family has headed Rajpipla state for over 600 years and Manvendra is the 39th heir in line to that throne. His father is the current maharaji.)

Manvendra told how he suffered a nervous breakdown and was forced into an unwanted marriage (that failed) as he was coming to terms with his sexual orientation. Fortunately, he said, he was ‘saved’ by two important authoritative figures who helped him to see his sexuality as normal and as something not to hide from. “I was very fortunate in the hospital because my doctor completely understood my condition and told me there was nothing wrong with me… that I was normal and that homosexuality was an acceptable variety of human sexuality…he saved my life.”

The other person of deep influence for the prince was Ashok Row Kavi, India’s bold, colorful and articulate gay rights activist who led the gay movement out of darkness in the 1980s and 90s and is now in Delhi working for UNAIDS, and is still a major spokesperson for LGBT India.

“I love Ashok,” said Manvendra during the forum held at Paddington Town Hall, “he gave me the courage to come out of my closet and be proud of myself. He was my ‘mother’ and nurtured me—he still inspires me.”

The audience applauded the prince’s continuing boldness in spreading the message of gay rights and advocating for LGBT health care in a huge homophobic complex country through his charity work with the Lakshya Trust that he started in 2000.

Lakshya project manager Sylvester Merchant accompanied the Prince and responded to numerous questions about the health and education efforts of the Trust that especially targets MSM at risk people (including truck drivers) many of whom are marginalized or hidden from mainstream health and education in India. Lakshya also welcomes and supports another stigmatized population, the hijras, transgender/transvestites who live outside mainstream society.

Manvendra described a perspective that hijras have played a important symbolic role in his state’s cultural history going back over hundreds of years. “They have been considered as ‘auspicious’ personages” with special powers of wisdom and blessedness at such ceremonies as weddings and births. “So we welcome them and we make sure they have their own programs at Lakshya.”

As the questions opened for the audience, it was inevitable that the question would be asked about his own romantic life. One questioner cautiously asked the Prince if he had a significant other, with the rejoinder that of course the Prince did not have to answer.

With a wide smile and sparkling eyes and without dropping a beat, the Prince took the microphone said “I will answer that question, gladly. I have met someone recently within the past few months and I can say I have found my soul mate,” to which the audience responded with a hearty round of cheerful applause.

It was a special moment for all, to hear this brave and vulnerable royal of high bearing—once isolated by his status and sexuality– offering his shared happiness and humanity with very supportive like-minded others who know well the difficulty of finding love and compassion in a homophobic world.

It was an evening of courage, wisdom and truth telling. As Manvendra said toward the end, there is a Hindi saying “Truth always prevails”.

Aslso see:
Global Forum on MSM
APCOM (Asia Pacific Coalition on Male Sexual Health)
(The Prince is on the Board of APCOM)