How Religion Is Killing Our Most Vulnerable Youth 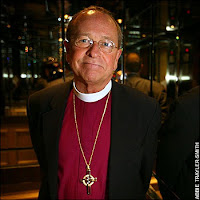 Perhaps not directly, though. And religion is certainly not the only source of anti-gay sentiment in the culture. But it’s hard to deny that religious voices denouncing LGBT people contribute to the atmosphere in which violence against LGBT people and bullying of LGBT youth can flourish. (photo right, Bishop Robinson)

The news is filled with the tragedies of teenaged boys who were gay and decided to end their living hell by committing suicide. Maybe they weren’t even gay, but merely perceived to be by their peers, who harassed, taunted, and threatened them unmercifully…

Despite the progress we’re making on achieving equality under the law and acceptance in society for gay, lesbian, bisexual, and transgender people, why this rash of bullying, paired with self-loathing, ending in suicide? With humility and heartfelt repentance I assert that religion — and its general rejection of homosexuality — plays a crucial role in this crisis…

It is not enough for good people — religious or otherwise — to simply be feeling more positive toward gay, lesbian, bisexual, and transgender people. Tolerance and a live-and-let-live attitude beats discrimination and abuse by a mile. But it’s not enough. Tolerant people, especially tolerant religious people, need to get over their squeamishness about being vocal advocates and unapologetic supporters of LGBT people. It really is a matter of life and death, as we’ve seen…