Didja read this one!? Goes to show how schizoid homophobia can be–and how dangerous it is in the hands of irrational public authorities. 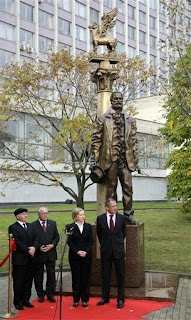 A statue of the American poet and gay icon Walt Whitman was unveiled in Moscow by Hillary Clinton, the US Secretary of State, at a ceremony attended by the mayor of the Russian capital, Yuri Luzhkov, who is vehemently opposed to gay rights.
Mr Luzhkov has called gay people “satanic” and banned gay pride parades in Moscow on public safety and morality grounds. However, he praised Whitman, whose poetry contains sensual references to men, saying that his works were “permeated with the spirit of American optimism”.

The statue stands in Moscow State University and was paid for with donations by US and Russian companies. Sergei Lavrov, the Russian Foreign Minister, called it a return gesture after the city government paid for a statue of the poet Aleksandr Pushkin at George Washington University in 2000. Both statues are by the Moscow sculptor Aleksandr Burganov.

Earlier this year Luzhkov said “The Moscow government is declaring that there has never been and never will be a gay parade in Moscow. The march would destroy the moral foundations of our society”.

Despite the ban, organizers of the 2009 parade went ahead with the gathering in Pushkin Square despite the risk of physical attack, which happened. (See Reports 8-15). They said in a statement (Times of London, May 16, 2009): “We have decided to stand up for our right to freedom of assembly,” Nikolai Alekseyev, of Gay Russia organization, said. “If [President] Medvedev and Mayor Luzhkov position Russia as a European country and invite Eurovision, the question of rights should proceed in a European way. It does not make sense that Russia would accept to watch gay singers at Eurovision and then ban gay activists from marching.”

Alexeyev said he was disappointed Clinton did not discuss discrimination against gays during her time in Moscow. “Russia is supposed to be a democracy and she said nothing,” he said. Alexeyev had called on Clinton to denounce what he called entrenched and degrading homophobic attitudes in Russia at her news conference Tuesday.