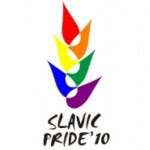 Saturday May 15 2010, gay Pride day in Minsk, Balarus, arrived and there were no unusual surprises: trouble was anticipated and trouble there was.

The gay participants knew the police would try to stop them. The police knew where the marchers were and intercepted them–but not before the combined rights activists from Moscow and St Petersburg joined the Belarus activists to unfurl a big rainbow flag, about 8 meters long (25 feet), and carry it along one of the main streets for a short distance. A few other participants unfurled their own smaller flags so the dozens of reporters and photographers from local and international press could take photos and have short interviews. Read more details from Logan Mucha’s report. 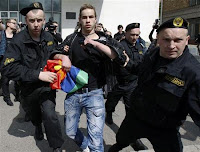 Events happened quickly once the police came into contact with the rights celebrants. The black uniformed troops jumped out of their trucks and quickly grabbed the big flag away from the marchers and spirited it away as other black shirts began arresting people (marchers and protesters) and shoving them into the trucks.

Reports vary about the actual number of people arrested but it was generally known there were fewer than 15 marcher arrests. One report said about the same number of skinheads were arrested. See this filmed report from Naviny.by.

Diplomats were called and the usual shuffle of affairs to get the arrested activists released although the Russian embassy basically said to the Russian participants “you’re on your own since you are in another country and under their laws.”

Symbolic of the corrupt and inefficient governance in Belarus is that eight of those arrested and detained were told by the police that they (the police) did not have petrol in their vans and could not take them to the assigned detention center where they were supposed to remain until the court hearing! Instead they were told that they would be released with a stern warning to show up in court on Monday. (This changed later when gasoline was mysteriously found and the captives were moved to a detention center until Monday.)

No one was seriously injured although folks were bashed around and handled roughly. More details can be read at the Reuters website.

The important issue of this broken event was less to do with waving flags and giving speeches and claiming human rights for LGBT people. But more to do with raising international awareness of human rights abuses, discrimination and homophobia in Belarus; to embarrass the government into paying attention to these issues and to homosexual Belarussian citizens. The current government is generally repressive, headed by a former Soviet apparatchik who governs the country in the dictatorial Soviet manner. There is little chance for gay rights to make headway other than to make trouble and use the press to raise LGBT voices loud enough to be even slightly heard in the government.

Part of that effort to embarrass and shame the authorities was the screening of the documentary called Beyond Gay: The Politics of Pride (see the summary trailer here) which displays the stark difference between repressive countries toward gays and the liberated countries as seen through gay Pride parades, from Vancouver to Sri Lanka to Moscow, among others.

Later in the night of Saturday there was a party planned at Minsk’s only gay club. Police surrounded the place to allow the party and to protect the people inside from the protesters on the outside. Eight people are still in custody until Monday but the Slavic Awards will be made tonight at the party. Then all will go home sometime to sleep and wake up to a quiet Sunday morning Minsk, as if nothing had happened.

Belarus has shamed itself. Although it can pretend to ignore a handful of queer crackpots waving flags, the symbolic meaning of Saturday will ripple across the borders to political and rights leaders who care about equality and human rights. The day will stand in Pride history and as a stain upon a morally corrupt government that will someday fall as human rights continues its slow and victorious march across homophobic and repressive Eastern Europe.