For Gays and Lesbians Apartheid is Alive and Well

Last night on PBS a drama titled ‘Endgame’ was broadcast nationwide that focused on the intense and delicate negotiations in South Africa in the late 1980’s that brought down apartheid and brought a new dawn of democracy in that tormented country.

It was a gripping drama of real life brought close up with cameras, script and fine acting by players who had not previously been privy to the dangers and risks of the political and murderous chess match. At any one time, any one of the historical figures

could have been assassinated, including Nelson Mandela whose release from 27 years in prison was the keystone to the new order of life in South Africa.

I couldn’t help thinking of the poignant parallel between the South African apartheid mentality that justified so much killing and violence, and the ongoing apartheid of today that continues against homo-affectional citizens around the world that manifests in murder, brutality, imprisonment and discrimination.

The singular enemy that the black-race ANC faced was the white-race National Party, a political authoritarian system of governance in place since the turn of the 20th century, which in 1948 manipulated apartheid into an official policy of repression.

More than One Enemy

But the homosexual ‘movement’ faces more than one enemy embodied in a single figurehead with an armed militia. Gay and lesbian citizens are surrounded by many forces that wish to minimize or destroy us daily in many countries.

We are assaulted by political enemies such as legislative systems who pass anti-gay laws; as well as legal systems that hand down unjust rulings; religious enemies that stigmatize gay people as sinners; societal enemies such as schools who allow bullying and refuse LGBT clubs; secular institutional enemies such as corporations who fire gay employees or refuse to extend health benefits to domestic partners; a military enemy that forbids homosexual personnel; and individual enemies who walk the streets or schoolyards with hatred in mind to attack queer or queer-looking people.

Yet such ongoing anti-gay discrimination is not seen as apartheid because so many of these institutions justify it and declaim against gay rights or protections.

When a lie is told loud and long enough it eventually feels like a truth—a notion that worked so well in Germany in the 1930’s and 40’s that soldiers and militias and individual vigilante groups felt justified, even righteous, in the carnage against gypsies, Jews, gays and Poles and others, thinking they were actually doing good to cleanse the Aryan society of pollutants.

So too today as these many enemies (ex-gay ministries, family focus groups in addition to the institutions) seek to cleanse gay contaminants from their ranks and pews and homes and parenthood. Their messages feed simple minds toward violence and bigotry–even in ‘developed’ countries with ‘advanced’ societies.

Two apartheid-style attacks occurred recently, one in the UK against an off-duty gay policeman (also this report) The other attack in the Queens borough of New York City against a gay man on his way home.

Even in the face of real-life facts (“I was born gay”), scientific studies (homosexuality in nature), disproven fallacies (gays are pedophiles), human rights progress (UN declaration of human rights)… people committed to ignorance and blindness insist on seeing in the darkness and shadows strangers whom they do not know yet target as sinners and criminals – victims of apartheid thinking. 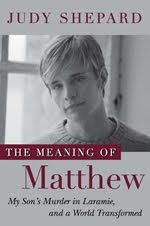 I think this struggle will never end because non-rational religious thinking infuses this mode of discrimination. Faith and belief rarely submit to logic, reason or evidence. The best we can hope for is legal protection against violence since there is no other means by which by which LGBT people can fend off the sword of religious contempt.

Their are exceptions of course. To their great credit, working uphill against spiritual violence are SoulForce, Other Sheep and St Paul’s Foundation.

Human rights are frail against prejudice and aroused emotion; anger will always cut through dignity with a bloody machete as it did in Rwanda and Burundi against enemy tribes and continues today in many African countries against gays (such as currently in Uganda), though nowadays not usually with hand-held weapons—except in Iraq where the killing squads use knives and guns for individual executions. In the USA fists and bats are favored.

The Matthew Shepard and James Byrd Jr. Hate Crimes Prevention Act, the first major federal civil rights law protecting lesbian, gay, bisexual and transgender people was just passed by the US Congress but not as a free-standing bill. It was attached to an obscene $680-billion measure for the Pentagon’s budget, which includes $130 billion for ongoing military operations in Iraq and Afghanistan. (Photo left: James Byrd, Jr)

The great irony in this Congressional act was that under the cover of protecting some innocents at home with a hate crimes statute, Congress authorized massive acts of war against countless innocents abroad.

We welcome the crumbs of the Shepard/Byrd law but for gays and lesbians the pandemic of apartheid is alive and well.