Dalai Lama Donates to Center for Healthy Minds. “It’s about changing habits of the heart.”

They say money can’t buy happiness — but it can finance the research.
When Richard Davidson (left in photo) , then a psychology doctoral student in the 1970s, told his advisers at Harvard that he planned to study the power of meditation, the scholars winced. 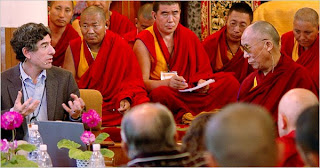 “They patted me on the knee,” recalled Dr. Davidson, now a neuroscientist at the University of Wisconsin, Madison, “and said, ‘Richie, this is not a good way to start a scientific career.’ ”

Dr. Davidson would one day find a mentor with a different frame of mind: the Dalai Lama. The Tibetan spiritual leader recently announced plans to donate $50,000 to the Center for Investigating Healthy Minds at Madison, a new research lab founded by Dr. Davidson, which is studying whether meditation can promote compassion and kindness.

The center has just started a project to teach meditation skills to fifth graders in Madison — focusing on charitable thoughts toward loved ones, strangers, even enemies. After the children enter middle school, researchers assess how their behavior compares with a control group, using a range of measures that will include reports from teachers. “It’s about changing habits of the heart,” said Dr. Davidson, 58, a Brooklyn native with gray-flecked hair, a warm smile and, as might be expected, a kind manner that puts people at ease.

In the study on children, Dr. Davidson said he had chosen to measure the results in middle school largely because those years were when “a lot of bad stuff starts to happen,” like bullying and drug use.

Dr. Davidson, who has been training adults in “mindfulness” for about a decade, incorporates the study of brain imagery in his work on meditation. He said that research showed that meditation could change brain-wave patterns.

The two became friends, meeting two or three times a year, in Madison and in India, where the Dalai Lama lives in exile. Dr. Davidson wears a red string around his right wrist that was given to him by the Dalai Lama as a symbol of their connectedness.

Much has changed for Dr. Davidson since the days when his Harvard advisers advised him not to bother with meditation. But some things endure. “Everyone still calls me Richie,” he said, “including his holy eminence.”