Banquet for a 26 Year-Old War-Maimed Marine: Who Should Police the World?

This evening I went to a benefit banquet for a 26 year-old war-maimed marine, a local resident here in the Northampton area of western Massachusetts–on the same day Barack Obama was awarded the Nobel Peace Prize.

Both of these serve as bookends to America’s dilemma in the world today. The personal carnage and loss of limbs at one end and the grand scheme to use war to bring peace to the world, to Afghanistan, to Iraq. What is the sacrifice our young men and women soldiers pay in the abstract name of ‘freedom’, especially in countries that have never known it?

Those “thousands of troops’ needed to defeat the enemy consist of young guys and gals like Joshua Bouchard of western MA, many armed in the Khyber hills and many laid up in beds with ghastly life changing wounds. What is the price of freedom and how do we use it when we have it. Should we charge forward with ideology banners waving and troops across the world that destroy thousands of lives in the wake? Are we destructively tangled in being the police force of this world? Hello Vietnam….

The great irrational fear that we targeted at Vietnam and the 50,000 dead soldiers lost in the ‘must win’ war are now all gone. Look at Vietnam today. Communism did not take over southeast Asia and Vietnam is becoming a capitalistic country. Bad governance has to change for the better in order to survive well, like China, Russia, South Africa–or alse take a country down in ruins a la North Korea, Sudan, Zimbabwe. or Burma. The USA cannot save everyone and our young troops cannot be wasted.

The following comments are taken from newspaper reports about Josh:
Sgt. Joshua Bouchard was serving his second enlistment and his seventh overseas assignment when he was seriously wounded in an explosion in Afghanistan. An apparent improvised explosive device detonated while he led a convoy in a southern province. The attack came as the U.S. pressed a new strategy to take land in southern Afghanistan from the Taliban and hold it. The mission in Helmand Province involving Marines with Bouchard’s brigade from Camp Lejeune, N.C., is a key part of President Obama’s plan, outlined in March, to take on al-Qaida terrorists there and in Pakistan with a bigger force.

Joshua is the son of James Bouchard of Darrel Avenue in Granby, MA and Mary Hafford of Harwinton, Ct. For the family, Joshua’s injury reopens wounds carried over from one generation to the next. The sergeant’s father, James Bouchard, was 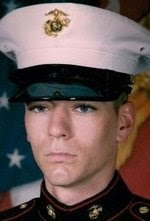 shot in the chest on a combat mission near Da Nang, in Vietnam, in 1969. He moved to the Pioneer Valley (western Massachusetts) in the early 1990s so he could receive care for post-traumatic stress disorder at the U.S. Department of Veterans Affairs Medical Center in nearby Leeds.

“This is just so tragic,” James Bouchard said Friday. “I didn’t think it would happen to him.”

Joshua Bouchard lost most of his left leg as well as suffered spinal injuries so severe he is not yet a candidate for a prosthesis, his father said. The Marine also fractured his right arm. Initially, it was thought the blast was from an improvised explosive device, but it is now believed it may have come from an anti-tank rocket, his father said.

Josh was a mechanic with the Marines’ 2nd Reconnaissance Battalion, 2nd Marine Division, II Marine Expeditionary Force based at Camp Lejeune, N.C. He was drafted into service as gunner because his unit was shorthanded, according to his father.

As a gunner he was in the open part of the vehicle. “He was open to the blast,” his father said.

The 26-year-old sergeant had already served two tours of duty in Iraq. He was traveling in the Humvee with four of his buddies, two of whom were killed and two of whom were also injured and are in the same trauma unit with Bouchard.

On the day young Bouchard was hurt a top Marine commander said more forces will be needed to push the Taliban from the province. Brig. Gen. Larry Nicholson told the Associated Press enemy forces will try to return to harvest a lucrative poppy crop he called “the engine that drives the Taliban.”

Bouchard and his crew have been awarded Purple Heart medals from the commandant of the Marine Corps during a ceremony conducted at their bedsides at Bethesda Naval Hospital in Maryland.

“His spirits are right up there. He is fighting this all the way,” the elder Bouchard said by telephone from the hospital on Thursday. But it will be some time before Joshua will be able to return home. Currently he is being treated for further medical problems–a broken coccyx bone at the base of his spine– at the veterans’ hospital in Richmond, VA.

Bouchard is a 2002 graduate of Amherst Regional High School, Amherst, MA. He enlisted in the Marine Corps in 2004 and recently signed up for another four years of service. Joshua’s family members have been at his side starting with when he was med-evacuated to Germany.