What God and Dogs Have to Teach Us

People disappoint each other a lot, whether intimate partners or friends, whether for a moment or a lifetime. People aggravate one another for petty things (picture on a wall) or expansive beliefs (religion).

The human condition, in addition to all its virtues and social values (companionship) which shape us as babies and influence us as adults, brings with it inevitable disagreement and agitation.

It seems built into the human psyche to not get along with certain others to greater or lesser degrees in the course of ‘civilized’ life. Some people are on the victim end of other people’s hostility and get blamed for problems; the blamers are angry at others who seem to disrupt or interfere with their plans or ideas. We call this disagreeableness, ‘bad chemistry’ between two individuals–or groups, which then divide off into segments, tribes, clubs or ethnic groups.

But consider this: even the most bothered, irritable angered individual or group often have pets, mostly dogs, they adore, toward whom they are tender and caring. 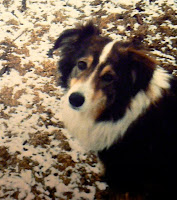 I had a dog (a sensitive and intelligent Australian shepherd, named Heather, photo right) for 13 years, now deceased. I am an easily irritated person, impatient, assertive, opinionated and usually wanting to ‘move on’ with projects, ideas, travel destinations… you get the idea.

However, regardless of my mood or situation over the years I was always gentle, playful, kind, cuddly and sweet-talking with Heather. There was a different energy between us and she was always happy to see me, tail wagging, tongue ready to lick my face, wining with delight at my return if I were away for a few hours. I baby-talked to her and she responded with her own playful growling and half-barks and doggie moans. Caressing her soft hair and absorbing her unconditional love was soothing for me, an uncomplicated affection with none of the subtle and overt personality interferences that often collide in human affairs. A sort of pure love and without the ‘stickiness’ of people.

(Be assured she was not a misanthropic substitute for human affection, which I’ve experienced much in my life; I’m not really that irritable.)

I see other many other people relating to their dogs with similar ease and delight in a special way that does not happen consistently between adults, whether same sex or opposite sex. There is a sort of child-like quality to the human-pet interaction that is pure and clean and a relief from humanoid ego.

I was reminded this kind of pure, clean, ego-free harmony during a recent trip to Central America which is very Catholic and very poor. In numerous ornate churches and simple chapels I saw humble peasants and laborers sitting or kneeling in silence alone or during a church service. (photo left, Panama City) Here in the mysterious grand, overarching and inspiring volume of the church (could be a mosque/synagogue/temple) with its other-worldly saintly statues, icons, paintings, venerated altars and stained glass, which gave it an ethos of divine, I felt a similar kind of innocent, pure, clean affection for God that I felt in the warm unconditional affection for and from my furry pet.

An other-worldly vibe that transcended the world of human affairs. Kneeling like a child before a master, sensing an unconditional benevolence and praying in soft supplicant and simple terms was akin to the loving baby-talk expressions I lavished on my pet.

The point is that it doesn’t have so much to do with the object of our affection here, an abstract God or an innocent animal. The point is the experience we have of ourselves in the interaction with such beings who are devoid of human ego, who listen to our voices, who hear us without interrupting, who receive whatever flawed offering of pain or kindness we bring. It is a moment or a while away from the trials of the worldly life, not unlike meditation or being absorbed in great music beyond the layers of ego and personality; restful serenity devoid of human noise or conflict.

If only we could approach people (loves and strangers) the way we approach our God or our Dog. Imagine a world of harmonious energy and the gardens of safe delight we could create.