U.S. pastors are exporting bigotry to Uganda, with brutal results.

This is an issue close to my heart, because I’ve spent over a decade working for equality as a lay leader in my own church, and now, as acting director of HRC’s Religion and Faith program – which helps religious leaders of all stripes speak out for equality and fight back when hatred is promoted in the name of religion.

On Thursday, that perversion of faith cost Ugandan gay rights advocate David Kato (on right in photo) his life. He was bludgeoned to death in his home after his name was among those listed in an anti-gay magazine, under the headline “Hang them!” 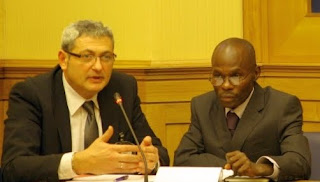 Since at least 2009, radical U.S. Christian missionaries have added anti-gay conferences and workshops in Uganda to their anti-gay efforts in the U.S. – and now they’re beginning to ordain ministers and build churches across East Africa focused almost entirely on preaching against homosexuality.

These American extremists didn’t call for David’s death. But they created a climate of hate that breeds violence – and they must stop and acknowledge they were wrong.

We’ll deliver your signature to three men who have gone out of their way to promote hatred:

They have been stirring up hostility in a country where homosexuality is already illegal, violent attacks are common, rape is used to ‘cure’ people of their sexual orientation – and a shocking law has been proposed that would make homosexuality punishable by life imprisonment or even death.

And they’re in lockstep with some of the largest and wealthiest right-wing groups in the U.S. When the U.S. Congress considered a resolution denouncing the grotesque Ugandan death-penalty-for-gays bill, the extreme-right Family Research Council – now classified as a hate group by the Southern Poverty Law Center – spent $25,000 lobbying to stop the resolution from passing.

Religion should never be used to spread hate. These men do not speak for me or the millions of diverse religious people who support equality not in spite of our faith, but because of it

That’s what our Religion and Faith program is all about: helping people of faith from all different traditions speak out so we can reclaim the core religious values we hold dear in America.

At the heart of every religious tradition is love of humanity and love of creator – not hatred for our neighbors. Creating a climate of hate runs contrary to the very idea of faith – but that’s exactly what the right wing in America is doing.

Whether or not we’re people of faith, we cannot stay silent or stand idly by while a radical minority pushes a hateful agenda in God’s name. Please stand with

us and speak out today.