September 11 is clearly a day of remembrance and sorrow and reflection about the past events in New York, Washington and Virginia. Families, cultures and religions were ripped apart that should not have been. Inhumanity struck a blow to civilized life and the consequences still reverberate around the world all these years later. 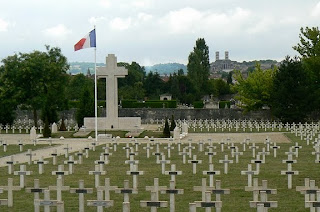 By co-incidence, on 9/11/10 my cousin and I had our own day of remembrance and reflection but not for someone killed on 9/11/01. We met to review my recent journey to France and the documents, maps, books and photos of another great and terrible event that happened on 10/16/1918: the violent death of our great uncle John on the French Meuse-Argonne battlefield of World War 1. Sadly, his death came just a couple of weeks before the armistice took effect on November 11, 1918 when combat enemies put down their guns and stopped killing each other.
(photo right, war cemetery in Verdun, France)

Luck had everything to do with his dying–being in the wrong place at the wrong time, yet it was not possible to know when or where luck was good and where it was deadly. Sudden violent death is governed by something we call chance, fate, accident, etc., as if it’s a real thing that can be seen or measured. When and where violence strikes, like death itself, is unknowable and when the crash comes those of us left standing are stunned in dumbstruck awe as to why it happened to others and not us. Even now after 9 years theorists, politicians, think tanks and military strategists still guess about the reasons for 9/11/01. Even now, after 90 years, World War 1 is argued about by historians as to the reasons and causative forces and military decisions that brought chaos and bloodletting across Europe.

But the theories mean little to the survivors and families of the lost ones who live in much smaller and particular worlds of brotherhood, emotional attachment and daily bread. John’s brother and sister spent the rest of their long 80+ years silently mourning his other-worldly death in a country they never saw. They had to go work the day after the shocking telegram came from the army. Francis and Mame had families to support and daily routines to complete. They had little time and no ceremony to mourn their loss (and no money to attend John’s re-burial at Arlington National Cemetery in 1922), unlike today’s televised elaborate ceremonies with national leaders and bagpipe music.

Uncle John is barely remembered today for his soldiering, his physical suffering, his trauma, the emotional shell-shock, the mustard-gas throat-hemorrhaging and blasted-to-bits of his comrades, the ear shattering of exploding artillery shells and bodies mowed down by machine guns. Words don’t come close to this insanity. None of the agony, 9/11 or 10/16, makes sense within ‘normal’ human sentience. Death by chance violence is staggering. Death by intentional violence, in war or by suicide bombing, by people against others, is outside civilized understanding, outside our usual capacity of reason; it renders us helpless and vacant.

In Remarque’s war novel ‘All Quiet on the Western Front’ he wrote (because he was there): “… shrapnel and high explosives begin to drop on us. We lose eleven men in one day, including five stretcher-bearers. Two are so smashed that you could scrape them off the wall of the trench with a spoon and bury them in a mess-tin. Another has the lower part of his body and legs torn off. Dead, his chest leans against the side of the trench, his face is lemon-yellow, in his beard still burns a cigarette. It glows until it dies out in his lips… Bombardments, barrage, curtain fire, mines, gas, tanks, machine-guns, hand-grenades–words, words, but they hold the horror of the world.”

All this is willful violence and the vast majority–if not all–of both enemy armies were dangling puppets of a few distant policy-makers, of far-off schemers bloated with nationalistic hubris in 1918 and religious hubris in 2001 that sought to destroy the sensibility of civilization. The few destroying the many and putting half the world in grief. We suffer sadness and dismay. We remember individual faces; we cry and lament, bury the dead or their remains then go home to cry some more. The masterminds of the madness lay low for a while–or retire on pensions–as the world weeps. And nothing changes. The sorrow becomes anger and hatred, as usual, but has no where to go except into depression and resignation.

We learn nothing and do nothing. The world is too big and complicated for us commoners to change anything. We decide to hate the Germans and the Muslims en masse as our revenge. And nothing changes. Wars and suicide bombers re-awaken in new places with new strategies. No one offers an answer that is heard by those in power, those most full of hubris and anger, those most in need of a new answer.

Soldier John, my uncle, smashed by artillery and John the anonymous banker pulverized under the Twin Towers are lamented and remembered for a while. The world waits for the next time madness strikes–and it will happen because we do not know how to resolve the artillery of hatred and the suicide bombs of separateness between cultures.