On Visiting Copenhagen in Winter

Snow fell three inches yesterday with fine white ground coat across the park in front of my apartment. On the other side of the park is a leafy evergreen cemetery which is really an extension of the park. It’s a fine time to take a walk across the mono-colored land making my own pathway, not following one. 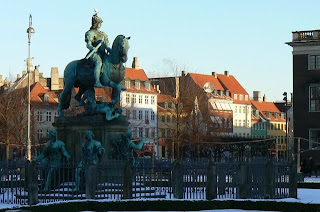 In the cemetery the headstones stand above the snow, each carved with the name and dates of a once live person. Some were merchants, or professors or artists.

Among the silent crowd here are three who made it onto the world stage of achievement: Hans Christian Andersen whose imagination created tales of the unreal but enjoyed by children worldwide.

More dense and intense are the works of Niels Bohr, a Nobel Prize physicist who studied quantum mechanics and atomic structure and was a contributor to the development of the atomic bomb.

The third luminary is Soren Kierkegaard, a complex Danish philosopher, theologian and religious author whose writing and talks focused on human psychology.”Much of his philosophical work deals with the issues of how one lives as a “single individual”, giving priority to concrete human reality over abstract thinking, and highlighting the importance of personal choice and commitment.

I stand in front on the silent stones of these great Danes and wonder at the influence of their lives on the world. Would present things be any different if they had not written or spoken? Was there change as a result? Perhaps with Bohr who helped develop a huge weapon that helped to halt war madness–for a while.

Soren was bright and challenged people’s self-limited thoughts regarding religion, politics and individuality. Dancing between the realms of objective observation and subjective faith he challenged both with his intellect. “…the crucial thing is to find a truth which is truth for me, to find the idea for which I am willing to live and die.”

Hans wrote for delight, for entertainment, for playful diversion and to educate others with his travelogues. These employ documentary and descriptive accounts of the places mixed with philosophical musings on topics such as being an writer, human mortality and immortality, and the nature of imagination.

The uses of the mind can be seen carved on numerous gravestones as I tread my way across the snow: artist, musician, professor, doctor–and mostly just anonymous names that had anonymous jobs to support their families in this northern city where vikings once roamed. I walk slowly among the stones, leaving my temporary tracks, my singular path. 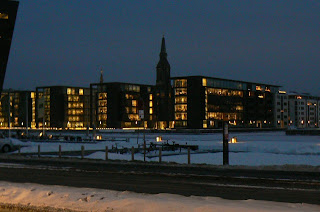 The day after the snow fell and made the city ‘of one white piece’ the citizens had tracked their own ways across the city, by bike, bus, train, car and on foot, each going to and from, then from and to, each weekday, months into a year. Doing what they want or must to live a modern life.

This is a city that’s well organized, civil, mostly honest, stylish, young and restless, tolerant of the Royal Family and their horse-drawn carriages, tolerant of same-sex affections and immigrants from Asia and the Middle East. High taxes yes but also health care for all.

And many museums with countless more works of long-dead Danes–sculptors, painters, jewelers, musicians and the craftsmen who designed and constructed the magnificent buildings. Enough artifacts of a thousand years to remind a visitor that this is no mere small kingdom but a vital part of the developed world, as best it can be for now.

Ingenuity is what makes this place function and shine. The entire city is steam heated by a central generating station on the east side of the harbor. Transporting people is an art–bikes, buses, trains, subways, cars, are all integrated, orderly, on time and systematized. There are bike lanes on virtually every road. Bus stops are clearly marked with bus numbers, schedules and sometimes digital timers that tell when the next bus is due.

Elegant palatial hotels dot the city along with spotless cheap hostels catering to budget travelers. There are public sculptures, parks and places to sit.

Opera, live theatre, ballet, pop and rock concerts; wealthy mansions house the landed gentry and poor struggling tenements house newly arrived immigrants from Turkey or Philippines. Problems abound but there are committees and proposals and programs to wrestle them toward a solution.

It’s another fine example of what peaceful civilization can be, along with such places as New Zealand, Switzerland and Canada–at any time of the year.