Gay and Straight at the Malmo, Sweden Train Station 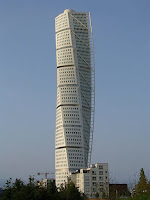 Imagine this: arriving at the Malmo, Sweden train station (30 minutes east from Copenhagen) for the first time and looking around at the kiosks, cafes, ticket offices, bustling commuters. Nothing unusual–until I wandered into the variety store (called Interpress, a la 7-Eleven) and beheld a blizzard of print–probably a thousand different magazines neatly displayed on dozens of shelves across seven or eight large racks.

I’ve never seen so many ‘zines in one place–ever. Topics ranged from hard core goth to feminist mags, from quilting to horse, dog and baby care. Computers and gardens, politics and boating, race cars and cooking…and on and on to virtually every interest area known to humankind, from race cars to tattoos and strange titles such as Nexus, Wired and Imagine; even one called Facebook.

This is Sweden and these periodicals reveal the range of knowledge choices a person has in this country. A wide open mind makes for a desirable culture: consider how many eastern Europeans and Middle Easterners yearn to come here.

above most gay lifestyle magazines, in Europe or America. It is so glossy (and informative) it weighs more than the others. It drips with carnality while handling heavy issues such as Catholic church hypocrisy and pondering the nature of ‘Faith.’

Clustered together are the others. 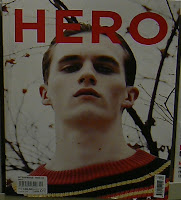 Hero is virtually all fashion and mood photos of pouting models with so much studied attitude that one wonders if they suffered more than a little getting into contrived poses and expressions of upper class ennui.

Not a smile for page after page. Is that how we want to be seen? What is the message here–sultry unhappiness amidst all that luxury? Do the editors or production directors realize the paradox here? Being well groomed and well off produces lassitude and languor?

My favorite cover was is Bang, actually a feminist magazine that is up front with their ideas and intentions. Two naked men kissing, lip-locked. I think the editor wants us to be slightly shocked by this image (in public!) but also wants to convey the latest trend in metro-sexuality–straights getting off on gays. Already hip youngsters in stylish cities go to gay discos because the music and decor are better. 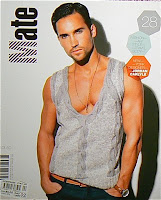 In Japan gay male comix are the most popular magazines sold, bought mostly by young hetero girls just budding in their sexuality in a country that restrains such energy and expression.

Mate, from Australia is not as bold as Bang. It’s also a lifestyle and fashion mag posed by the most fab guys with the most fab abs. I am continuously intrigued by the endless positions that photographers can find to disport their models. How much near-nudity–down to pubics–does one need to advertise a wrist watch!?

How much can a reader take? Apparently a lot. The urge is infinite and beefs sells. 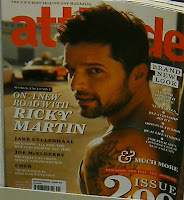 And don’t forget personality cults and fan clubs. This month in Attitude, Ricky Martin holds center place with his belated coming out story that we’ve all heard fifty times in other magazines–People, Us, Teen and Oprah. Let’s wring one more feature out of this gay father pop singer before he fades into early middle age.

(Add to these six publications a seventh, across the Oresund Sound in Copenhagen, the free LGBT monthly ‘Out & About‘ with more stories, happenings and flesh.)

I also observe that hardly anyone notices, in this public train station, in Sweden, where near-nude anatomy in print is like cucumbers
and tomatoes in the supermarket. It’s so available it’s taken for granted– the lifestyle periodicals have to keep trying harder and harder to gain attention. More skin! This is a country where women recently won the right to swim topless in public pools–because men do; a very egalitarian society.

Here in ‘heathen’ Scandinavia it is more than proven that men and women do not go wildly out of control seeing flesh above the ankles. Let a few Arabic governments learn from this and lighten up and stop thrashing their women for such exposures.

Cape diem–it doesn’t get much better than this in the next life despite how many virgins are promised to the panting believer. Browse the magazine kiosks and enjoy the view of ourselves. It’s who we are–gay, straight and in between.