Farewell to a Friend Dying Too Young

This is where the gay boys are housed in their trendy unpainted wood and glass mansionettes surrounded by scrub oaks, wooden sidewalks, sandy beaches and testosterone. It takes a ferry to get here and much money to stay; it’s definitely a place for upscale gay males and their less affluent friends, including weekend toy boys. In the small harbor float half a dozen luxury yachts belonging to the really rich.

But I was not there for the scene and neither were the other 15 guys and one woman who gathered one weekend in May at Steven’s house on Neptune boardwalk. It was a party of sorts, except the guest of honor was not there. Conrad died a few months ago in Bali. Only his ashes

remained, transported here by his ‘widowed’ partner, Michael, in a carved wooden box (from Indonesia, of course).

Conrad and Michael were a gay couple living in Bangkok (photo left)–busy, compatible, productive and sociable. They loved long-distance living. Suddenly Conrad’s heart stopped. He was 62.

I knew Conrad since he was 18 and I was 26 at Tufts University but we had lost contact for years–resolved with a happy reunion last year in Bangkok, with Michael.

Reaching that far back into personal history is only possible with a rare friend who remembers shared vague moments, fragmented images or fumbling and forgotten passions. It’s a special reach back into the misty swamp of memory that only historical friendship can evoke.

I like the crashing feeling of being yanked backward 40 years to forgotten-yet-not places, people and action normally crusted over with time and re-awakened suddenly with a youth-charged old friend who speaks names and feelings and carnal moments of long ago. Conrad and I did that on our last visit.

Now those particular memory streams that he could re-awaken are silenced. I don’t mind the loss of those memories but I do mind losing him. 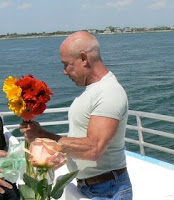 Surviving partner Michael (photo right) arranged everything perfectly for the memorial weekend–rooms at neighbors’ houses, communal dinners at Steven’s and the boat to take us out to sea to spread the ashes, followed by strewn flowers from the friends on deck. The weather was quite fine: some scattered clouds, sunshine, calm winds, warm early May. (A storm followed a while later.)

Michael held open the silken bag and the ashes fell to the sea. It seemed such a simple end to a life that was complex, adventurous, unique–now dust. As I age, illness and death encroach on one friend after another, one family member at a time. I don’t much like it. I’d like my favorite and long-distance friends, lovers, parents and chosen family to answer the phone when I call.

But the way of the world is not my will; there’s only the fading echo of their voices and the ashes in the wake.