Africa and Homosexuality: Is It Natural and Native?

On March 5 this year the British Broadcasting Company, always looking for unusual or controversial subject matter to entertain its audience, found spice in sponsoring a debate about homosexuality in Africa. It’s a topic that is guaranteed to stir up dissonance and disagreement and, true to form, the televised ‘discussion’ indeed did just that. 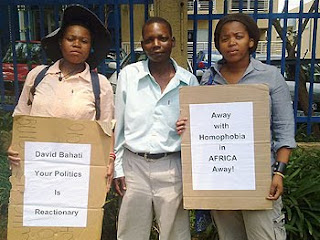 With a hand-picked audience of pro-gay and anti-gay activists from across Africa the stage was carefully set to hear rational and emotional arguments about same-sex orientation and behavior.

To me it felt rather like a staged carnival show with pre-set performers revealing (and some shouting) their reasons and biases for or against an imagined ‘gay agenda‘ in Africa.

(Photos: protests outside the BBC studios during the debate)

The official title of the debate was “Is Homosexuality Un-African?” With five panelists (listed below), three pro-gay and two anti-gay, the underlying message was pre-set, appropriately in my mind, to help enclose gay rights into a larger frame of human rights. The moderator, Zeinab Badawi , made an effort to be polite to the homophobes–including panelist David Bahati, author of Uganda’s proposed death-to-gays legislation.

Despite anti-gay comments from certain audience members who repeated the usual ‘unnatural–man4woman–sinful–child-recruitment–procreation’ arguments against homosexuals, the slant was clear. Leading African lesbian and gay activists in the audience were given turns to speak against the anti-gay arguments–including Monica Tabengwa whose group LeGaBiBo in Botswana is suing the government for its alleged unconstitutional statutes against homosexuality.

The positive flavor of the program was not unexpected since the UK (home of the BBC) has become one of the most pro-gay countries in the modern world, along with South Africa. The UK requires its world-wide ambassadors to advocate equality and human rights. (It should, as penance, since it was the 19th and early 20th century British Empire laws that criminalized homosexuality and set the stage for today’s world-wide homophobia to take root in many former colonies.)

At the end of the debate Bahati said he was leaving the debate and South Africa “with a bleeding heart” meaning he was disheartened by hearing opposing views; he is not going to be dissuaded from his arch-homophobic attitude or his legislation no matter what reasoned or personal testimony he encounters. So the social disease of homophobia continues to be spread.

Someone should have said to him “now you know how gay hearts bleed in Uganda under your governance.”

The debate was broadcast on the BBC system on March 12 and 13 and the video was released to the media. The video is available free and the link is posted here. It lasts 47 minutes.